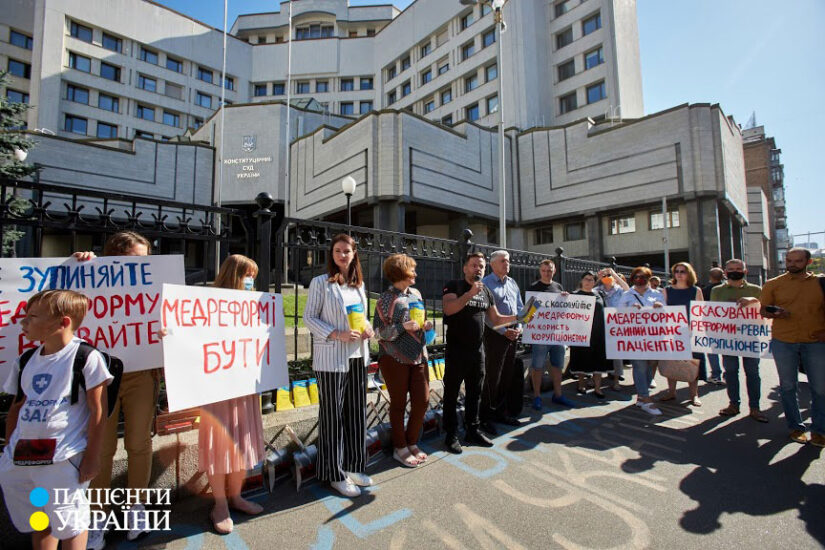 On July 23, 2020, an action “Ingrained Soviet Mentality Kills Medical Reform” was held in front of the Constitutional Court of Ukraine. Patients took to defend their constitutional rights to affordable and quality medicine.

Today, the Constitutional Court of Ukraine has begun consideration of the claim on constitutionality of the Law On State Financial Guarantees of Medical Care for Population, which is the law on medical reform. That is, the Court will decide whether the law on medical guarantees complies with the Constitution of Ukraine. If the law is declared unconstitutional, the reform will be canceled. The authors of the claim are former members of the Party of Regions, who continuously resist the qualitative changes in Ukraine.

“The authors of this claim are former ex-regionals, people who have benefited from the lives and health of patients for years. Now they want to bury the medical reform and bring us back to the Soviet times. For years they have been building the corrupt system supported by the medical clans, Soviet traditions, terrible medicine practices and outdated medical equipment. In their system the human life is worthless; patients are nothing but the source of income. It does not matter how the patient is treated or whether the patient survives. The main thing is that he pays while the regionals continue to cant that we have high-quality and free medicine”, said Dmytro Sherembey, Head of the NGO ‘100% Life’.

The Law on Medical Reform is the first law of the independent Ukraine, which really reforms the health care system. The Law was adopted on October 19, 2017. Since then the Ukrainian citizens have received the right guaranteed by the Constitution – the right for quality and affordable treatment, the right for life.

Transformation of the medical system is still ongoing, but patients already experience its positive results. 30 million Ukrainians have signed declarations with a family doctor. Of these, 73% are satisfied with their family doctor according to the Health Index survey for 2019.

“For the first time in 29 years of independence the patients have received the benefits guaranteed to us by the Constitution – these are free and affordable medical services. The patient no longer humbles himself to win his right to life. Moreover, the medical reform builds a new model of relationships and mechanisms that are clear, understandable and transparent. Human life and health are the core value in this system”, said Elena Sotskova, Founder and the Board member of the NGO “Association of Parents with Inflammatory Intestine Disease FULL LIFE”.

Not only patients, but also doctors experienced positive changes.

“Our hospital did not dismiss any health worker for the whole period of the medical reform. The reform assisted us to properly arrange the clinical work making it more efficient. We reduced the number of beds, but at the same time the number of births considerably increased. The medical reform is an opportunity for doctors to work, receive decent salaries and not to ask for bribes, but to provide free services to patients”, said Dmytro Govseyev, Medical Director of the Kyiv City Maternity Hospital No 5.

If the medical reform is canceled, It is unknown exactly how the transition period to the previous system will take place. People will lose their family doctor, general practitioner or pediatrician of their choice. During the COVID-19 pandemic, a patient will have no one to call, because the family doctor is the first person we call on any suspicion.

“It is unknown how the hospitals will be financed if the Law On State Financial Guarantees of Medical Care for Population is recognized invalid. What will happen to 3,029 health care facilities that have joined the reformed system? What will happen to the 125,000 doctors working in the new reformed conditions? We do not know who and how will finance the medical care, but we know for sure that this is going to be a difficult process both for the patient and for the doctor”, said Inna Ivanenko, Executive Director of the CF “Patients of Ukraine”.

Previously, patients’ organizations have already sent their appeal to the Constitutional Court with a request to take into account the opinion of patients about the results of medical reform and why its cancellation is catastrophic.