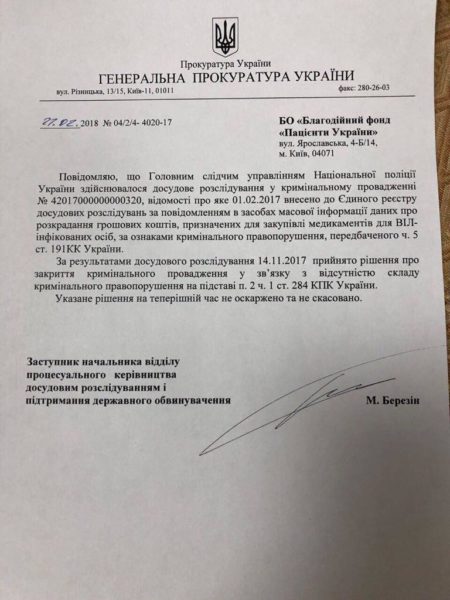 “From the very beginning we kept saying that we were not afraid of any inspections as we had nothing to hide, comments Inna Boiko, Acting Director of the Foundation, – It’s a great pity that we had to waste almost six months to prove our point. It was six months of nerves and efforts of all our colleagues, who had to look through the files of three years back and attend court trials”.

Interestingly, that the GPO letter also specifies the reason for filing the criminal case, in particular: “…entry in the Unified Register of Pre-Trial Investigations based on information from mass media about financial crime”. Unfortunately, it is equally disappointing that the real crimes at the prompting of journalists investigators are not always under inquiry.

In October 2017 the investigation moved into its active phase, when the investigators from the General Police Directorate of Ukraine received access to the files of the Foundation with the right to suppress all documents for the whole post-Maidan period of 2014-2017. In January 2018 the Foundation was under extraordinary tax inspection assigned by the Peshersk court.

It emerged that the investigation continued after the case had been closed by the GPO in November 2017, which was illegal. Once the prosecutor closes the case, further investigation is terminated in compliance with the law.

At the same time the Tax Inspection Service did not reveal any violations of the law in the work of the CF “Patients of Ukraine” and confirmed the targeted use of the grant resources, however the fact of this tax inspection taking place after the case was closed is illegal.