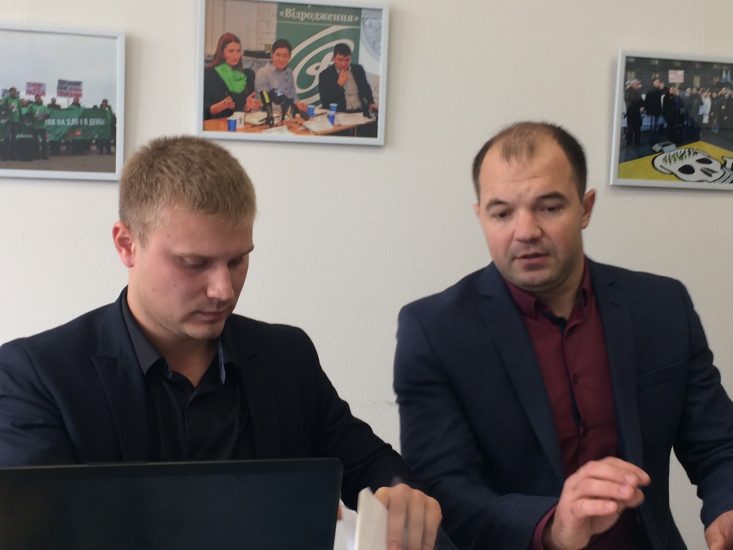 The investigator of the Main Investigations Directorate of the National Police of Ukraine is currently reviewing and copying the documents of the Charitable Foundation “Patients of Ukraine”.

This is the first seizure of the documents from the NGO, a member of the community “Reanimation Package of Reforms”

Senior investigator for especially important cases of the National Police Main Investigations Directorate Nykytyuk S.S. and the National Police investigator Roman Onyshchenko came to seize the documents. They could not explain the legal merit of the claim and were not familiar with the materials and content of the criminal case in detail. “I am an executor of a particular investigative action, which is the seizure of documents. The details are known to the chief of the investigation team”, Onyshchenko explained. According to him, the investigation team for this case consists of three members. Senior investigator Nykytyuk, who received the court order for the seizure of documents, refused the comments and only reported that the case is filed by the General Prosecutor’s Office and that all questions should be addressed to them.

The documents are seized according to the Pechersk Court ruling as part of the criminal case on “procurement of medicines for unreasonably high prices” and “embezzlement of money of the international organization “The Global Fund to Fight AIDS, Tuberculosis and Malaria” in especially big amount”.

“For 6 years of its work the CF “Patients of Ukraine” never procured any medicines, not a single pack, not for any project. The investigators cannot explain what the source of this information is. The court ruling does not explain it either. We cannot understand, which arguments were used by the investigators to persuade the judge to issue the permission for this seizure. The seized documents do not contain information on the medicine procurement!”.

The law enforcement authorities want to seize all financial documents of the CF “Patients of Ukraine” for the post-Maidan period.

“Court ruling received by prosecutors and investigators does not contain any fact or specific period that would be of interest to the law enforcement officers. This indicates that there were no grounds for prosecuting the case, which is a ‘designer case’ with the aim of obtaining financial documents of the organization and finding something there after that”, NGO staff considers.

“We regard this as a lever of pressure, as an attempt to block our activities because the Global Fund has no questions to us. We have been working together for many years and every year they extend this cooperation”, states Olga Stefanyshyna, the Executive Director of the CF “Patients of Ukraine”.

It is noteworthy that the Global Fund regularly attracts external auditors to confirm the target use of the funds by the CF “Patients of Ukraine”.

Activists also associate these actions of the law enforcement officers with the fact that these organizations were engaged in promoting the reform of public procurement of medicines and in delegating this function to the international organizations. This reform, according to the estimates of the Accounting Chamber of Ukraine and anti-corruption organizations, annually saves for Ukraine up to 40% of the state budget for procurement of the medicines.

It is worth mentioning that 588 organizations receive funding from the Global Fund in Ukraine, including 354 health facilities (AIDS centers, tuberculosis dispensaries), 124 correctional institutions and 100 NGOs

For information:
The Global Fund to Fight AIDS, Tuberculosis and Malaria was established by the United Nations in January 2002 to assist in funding the national AIDS, tuberculosis and malaria programs in countries with a low level of own resources.