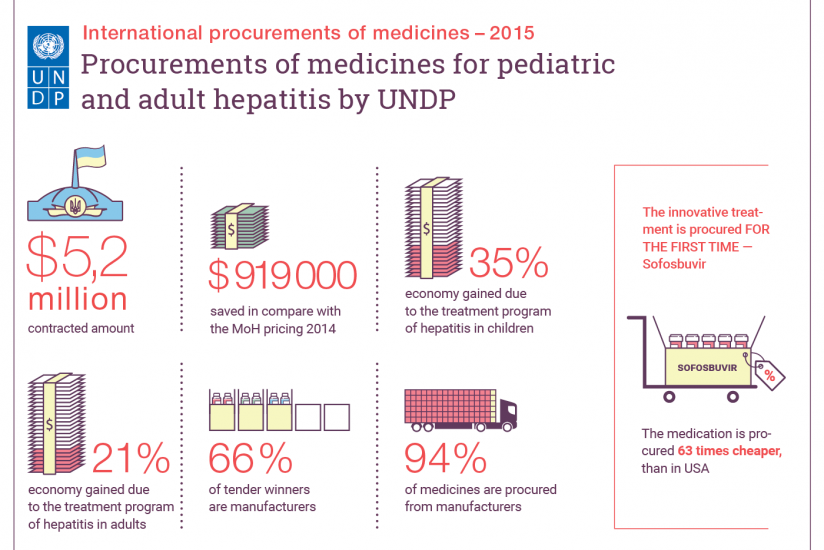 Also, for the first time in Ukraine, patients with hepatitis C will receive the innovative treatment with Sofosbuvir, which was procured at public expense. UNDP procured it 63 times cheaper than it costs in USA. Sofosbuvir was procured for Ukraine at a price of USD 17.38 per tablet while in USA it costs USD 1100 per one.

Overall, the price for one course of Sofosbuvir for Ukraine is about USD 1460. Almost all medicines were directly procured from the authorized representative of «Gilead» in Ukraine Delta Medical Promotions AG (Switzerland).

Also, in Ukraine operates a unique program to ensure treatment with Sofosbuvir for the most-at-risk groups. The program is implemented by the International HIV/AIDS Alliance in Ukraine with the support of the Global Fund to Fight HIV / AIDS, Tuberculosis and Malaria using original Sofosbuvir manufactured by the company «Gilead». Negotiations on the program implementation have been started in 2014, while the program was launched only in April 2015, before Sofosbuvir was officially registered in Ukraine (the last negotiations were held on October 9, 2015) in the framework of the international program on access to treatment with DAAs for low- and middle-income countries. Almost 800 patients receive the treatment under this program. Sofosbuvir was procured for Ukraine at a price of USD 900 per treatment course. Currently, no fewer than 1500 patients will receive free treatment under this program.

UNDP has signed contracts with six companies, four of which are manufacturers. In addition, 94% of medicines have been procured from the producers. Especially tellingly is the procurement of the drug «UNITRON PEG» for treating children with hepatitis. In 2014, the Ministry of Health procured this medicine from the distributor «Farmadis» LLC (Petro Bahriy group), at a price of USD 122 dollars per bottle (without VAT). UNDP was able to procure it directly from the manufacturer almost three times cheaper — at USD 47 dollars per bottle (including logistics and UNDP reward).

Another interesting situation was observed while procuring of «UNITRON» for treating of adults. While the Ministry of Health in 2014 has procured this medicine from the manufacturer «Lumier Pharma» LLC at a price of USD 79 per one bottle, an international organization managed to drive the price down and purchase it from the same manufacturer at a price of USD47 per bottle.

«International organizations again proved their effectiveness. Manufacturers directly took part in tender process, thus greatly affecting the prices on the same drugs procured by the MoH and international organizations. Finally, the funds allocated for the medicines procurements started to work for patients but not settle in the pockets of officials,» — says Olga Stefanyshyna, the Executive Director of the CF «Patients of Ukraine».

Once again it is confirmed by the procurement of TENOHOP drug (Tenofovir 300 mg) gaining 50.59% of economy. The Ministry of Health procured in 2014 these drugs from Ukrainian distributor «Ukroptpostach» LLC, which is also associated with the Petro Bahriy group, at a price of USD 0.26 (excluding VAT). This year the same drugs were purchased by UNDP at a price of USD 0.13 from manufacturer Macleods Pharmaceuticals Ltd, India (including logistics and administrative fee).

However, the following drugs procured by UNDP, turned out more costly if compared to MOH 2014 pricing:

UNDP has yet to procure two drugs: Recombinant interferon alfa-2b and Lamivudine for the treatment of hepatitis B in children, and procure additionally Ribavirin. To do this the additional tenders will be announced.

The total amount of signed contracts under which 18 medicines have been procured, made up USD 5 283 014.98. 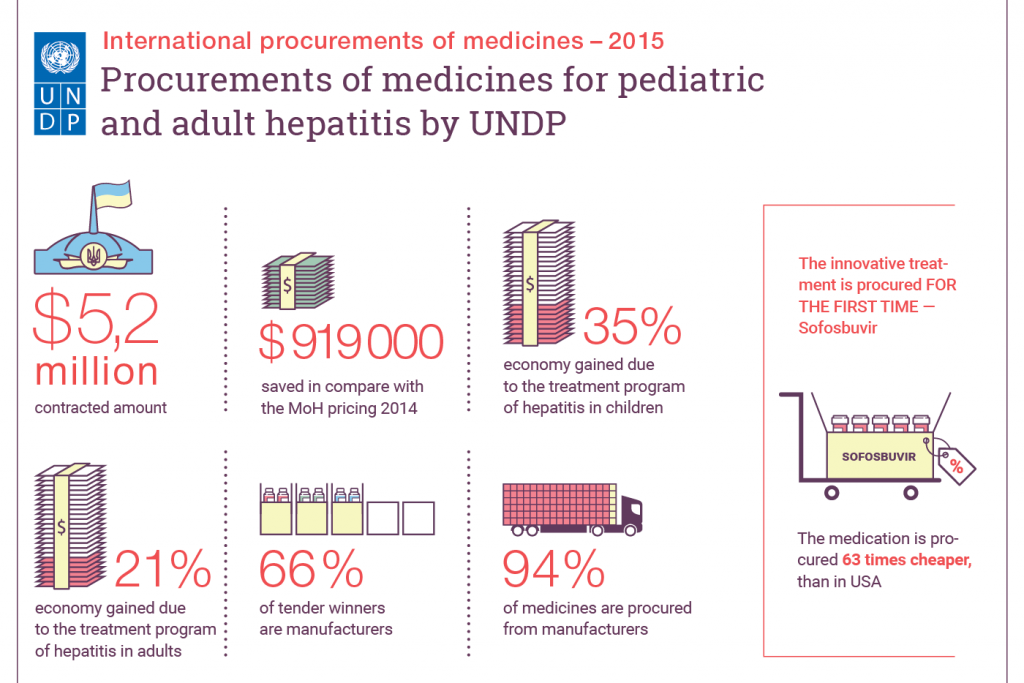