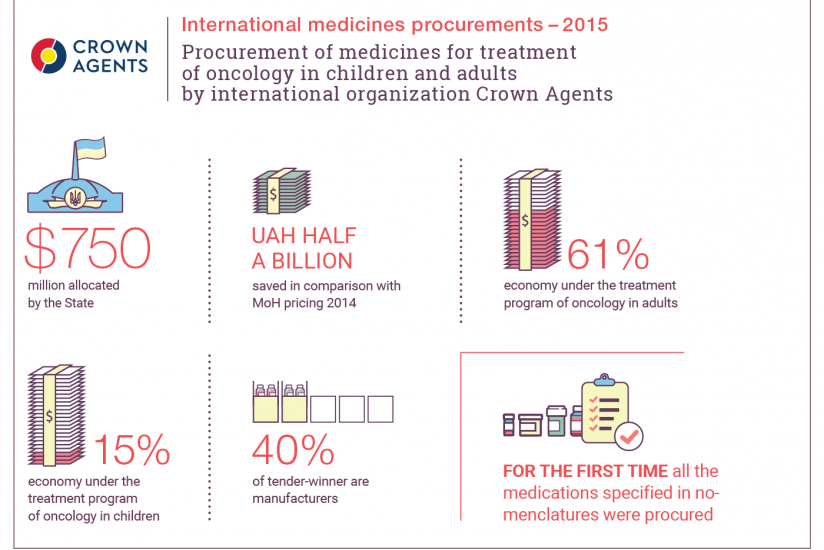 British procurement organization Crown Agents has procured medicines for the treatment of oncology in children and adults approx. 45% cheaper over the MoH pricing 2014.

«International organizations once again proved their effectiveness. Over 40% of saved money on the procurement of medicines for cancer patients indicates that from one year to the next this money settles in pockets of corrupt officials. Every year seriously-ill patients are undersupplied with almost half of the medicines», — says Olga Stefanyshyna, the Executive Director of CF «Patients of Ukraine». Despite dirty manipulations, attempts of lobbyists of pharmaceutical mafia to disparage medicines procurements and international organizations in particular, «Crown Agents’ still has managed to procure medicines more efficiently than the Ministry of Health did it in previous year», — she added.

According to the information released by Crown Agents, the international organization managed to receive proposals on procurement of all necessary preparations according to the nomenclature submitted by the Ministry of Health. This is a precedent, considering the fact that all the medicines from the list have never been procured by the Ministry of Health. For example, in 2014 MoH was unable to procure such drugs as Calcium folinate, 30; Methotrexate, 100; Lenohrastym, 33,6.

Meaningful is the procurement of the medication Tasigna. Last year the Ministry of Health procured it almost twice more expensive from the company Hansa than Crown Agents did it from the company Farmadis this year. It is noteworthy that both distribution companies are associated with Petro Bahriy.

Medications such as Endoxan and Uromitexan Crown Agents was able to procure cheaper due to participation in tenders of the company-manufacturer Baxter. A similar situation happened to medications such as Doxorubicinum, Letrozolum, Methotrexatum, Piperacillinum / Tazobactamum, Fludarabinum, which were procured at lower prices due to participation in bids of official representative of Teva. Also international organizations procured such drugs as Dipherelin and Zarzio at a cheaper price from the same supplier as MoH did it the previous year (Liudmyla Farm LLC and Ukroptpostach LLC). Ukrainian manufacturer of Zoledronic acid Pharmex Group also sold Crown Agents its medicines at half lower price over the MoH pricing 2014.

Overall, 40% of tender-winners are manufacturers of medicines.

«Despite the fact that not only manufacturing companies participated in bids, international organizations managed to significantly reduce drug prices indicated by agents. This once again proves their effectiveness», — states Alexandra Ustinova from Anti-corruption Action Centre. Namely, procurement of cancer medicines caused the largest number of scandals. First of all, it happened because on this procurement agents earned the biggest «margins». That is why they sabotaged the signing of contracts and suppling of drugs.”

«UAH half a billion of saved public money only proves the effectiveness of anti-corruption laws that we adopted in Parliament last year. This means that many more patients will receive drugs due to international procurements, nor is it would be if procure medicines through the Ministry of Health. This year, the Ministry of Health should transfer the procurement function to international organizations as soon as possible in order to prevent delays and interruption in the supply of medicines», — claims Hanna Hopko, the Chairman of the Foreign Affairs.

It should be noted that the delay in the supply of medicines and vaccines in the framework of international procurements ocured due to sabotage within the Ministry of Health. During 8 months of the year 2015 the Ministry of Health delayed the development of regulations to the Laws #269-VIII and #332-VIII, which eventually put international organizations in time- and formal frames and close the door upon timely procurement of medicines and their delivery to Ukraine. In addition, through sabotage of Ukrainian agents the most part of the preparations under the treatment oncology is still not put to Ukrainian hospitals.

Several medications are still under negotiations with the Ministry of Health, so the contacts aren’t singed yet.

At the same time, several items appeared to be more expensive in comparison to the price of the MOH in 2014: 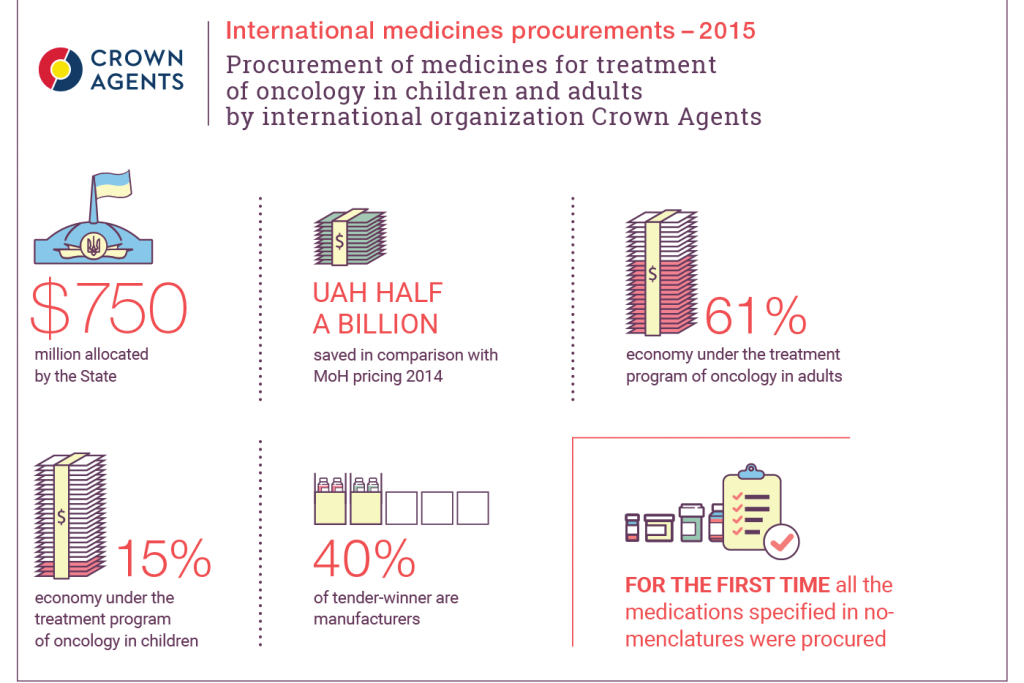