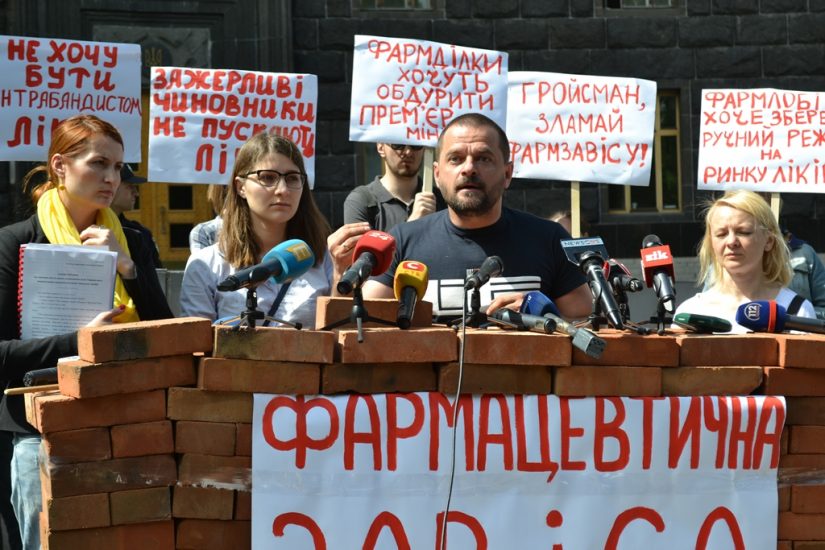 Activists of the patients and public organizations came to the building of the Cabinet of Ministers protesting against micromanagement of the pharmaceutical market regulation. The patients who have to illegally import the medications not authorized in Ukraine ruined a brick wall with an inscription «Pharmaceutical Barrier» in front of the Cabinet of Ministers. By doing this they wanted to show the need to destroy the artificially created barriers due to which thousand of Ukrainians have limited access to quality medications.

«In order to save lives of the oncology children the doctors prescribe medications, which have no alternatives in Ukraine. As a charity foundation we have two options. The first one is to purchase them in the black market with no guarantee what the package contains; therefore we will never use his option. The second option is to find someone abroad, who can sell these medications legally. For already half year we are looking for one medicine in various clinics abroad. This is the longest legislative and bureaucratic red tape, so children may not wait till it’s over», said Natalia Onipko, the Head of the Charity Foundation Zaporuka.

On April 20 the Cabinet of Ministers of Ukraine approved Resolution No 312, by which implemented the simplified authorization procedure for the medicines from the states with strict regulatory norms, such as USA, Switzerland, Austria, Japan and the EU states. Further simplification of the authorization procedure, annulment of the unnecessary licenses and permits created for micromanagement of the pharmaceutical market and bribing of the officials were going to become the next steps. The Government bill No 4484, which specified deregulation of the pharmaceutical market, was registered in the Verkhovna Rada on April 20, 2016. However, during one week the Health Ministry amended this bill so that it actually limited any competition on the pharmaceutical market downplaying the very idea of deregulation . Further some MPs submitted alternative draft laws aimed at protecting the current situation in the pharmaceutical market and creating even more barriers for supply of the medicines to Ukraine. Particularly, Ms T. Bakhteeva by her remarks at the latest meeting of the relevant committee actually shelved the urgent idea of the Prime Minister of Ukraine.

«We are sick and tired of listening to the arguments of MoH and some MPs that we will heap Ukraine with low quality medicines authorized in Europe. This and some other myths are permanently communicated by those MPs and officials, who under the pretext of deregulation are actually tightening the screws on supplying the medicines that were authorized in the regulatory authorities of the states trusted by the whole world. The whole patient community supports the idea of the pharmaceutical market deregulation. That is why today we submitted to Volodymyr Groisman a progressive draft law supported by the public and the professionals and aimed at real deregulation of the market and its supply with quality medicines», indicates Olga Stefanyshyna, the Executive Director of the Charitable Foundation Patients of Ukraine

Different variants of the bill No 4484, actively discussed in the VR and in MoH, contain a number of artificial limiting factors. For example, one of the obligatory requirements for access of the medicine to the simplified authorization procedure is its manufacturing in the USA, Australia, Canada, Japan or in the EU member states. However, all medicines authorized in these countries are quality, effective and safe irrespective of the manufacturing country — either the EU member state or another country of the world. Moreover, some companies locate their production facilities outside the EU for economic reasons, however manufacturing standards for the medicines authorized in strict regulatory jurisdictions guarantee quality and safety of the product.

Another artificial restriction is the requirement that throws Ukraine back for 20 years in authorization of the medicines in comparison with other countries. This key requirement is the use of the medicine in the clinical practice of the authorization country according to the guidelines or formularies of these countries. However, an average period between commercial distribution of the medicine and its inclusion into formularies and guidelines is from a couple to 20 years. Is there a sense for Ukrainians to wait for so long in order to receive an access to the novel medications, which were tested for quality and safety according to the strictest rules in the world? Moreover, the clinical guidelines of the most developed countries include only those medicines that are subject to reimbursement from the state budget, and this is a limited range of medicines. Therefore, the Ukrainian pharmaceutical market will be closed for the medicines sold at the European pharmacies.

«The largest threat of the deregulation is authorization of those medicines that are used in the indicated countries. The point is that it is very difficult to prove the fact of usage because it will be exclusively at the disposal of the Ukrainian authorization body to recognize the document certifying the fact of usage. As a lawyer I would say that there is no such document of the prescribed form. This will cause legal uncertainty and micromanagement of the pharmaceutical market», indicates Olga Svyatenka, lawyer of the Law Firm Arzinger.

The patients’ organizations and the professional community call on the Prime Minister of Ukraine to renounce the lobbying proposals and to take into consideration the draft law developed by the experts. 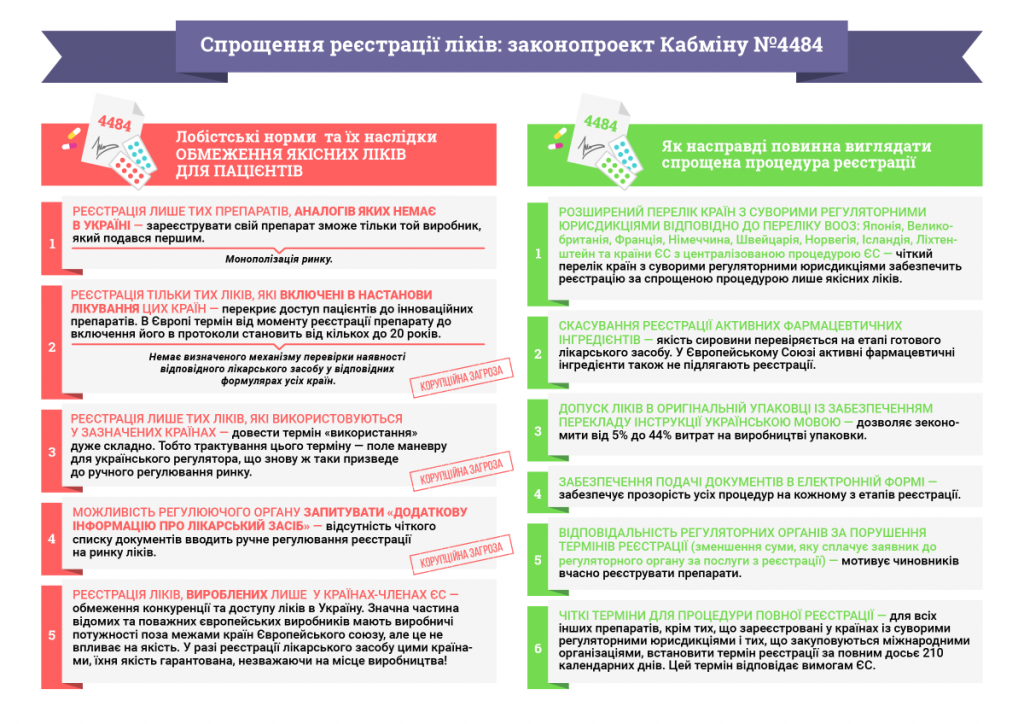