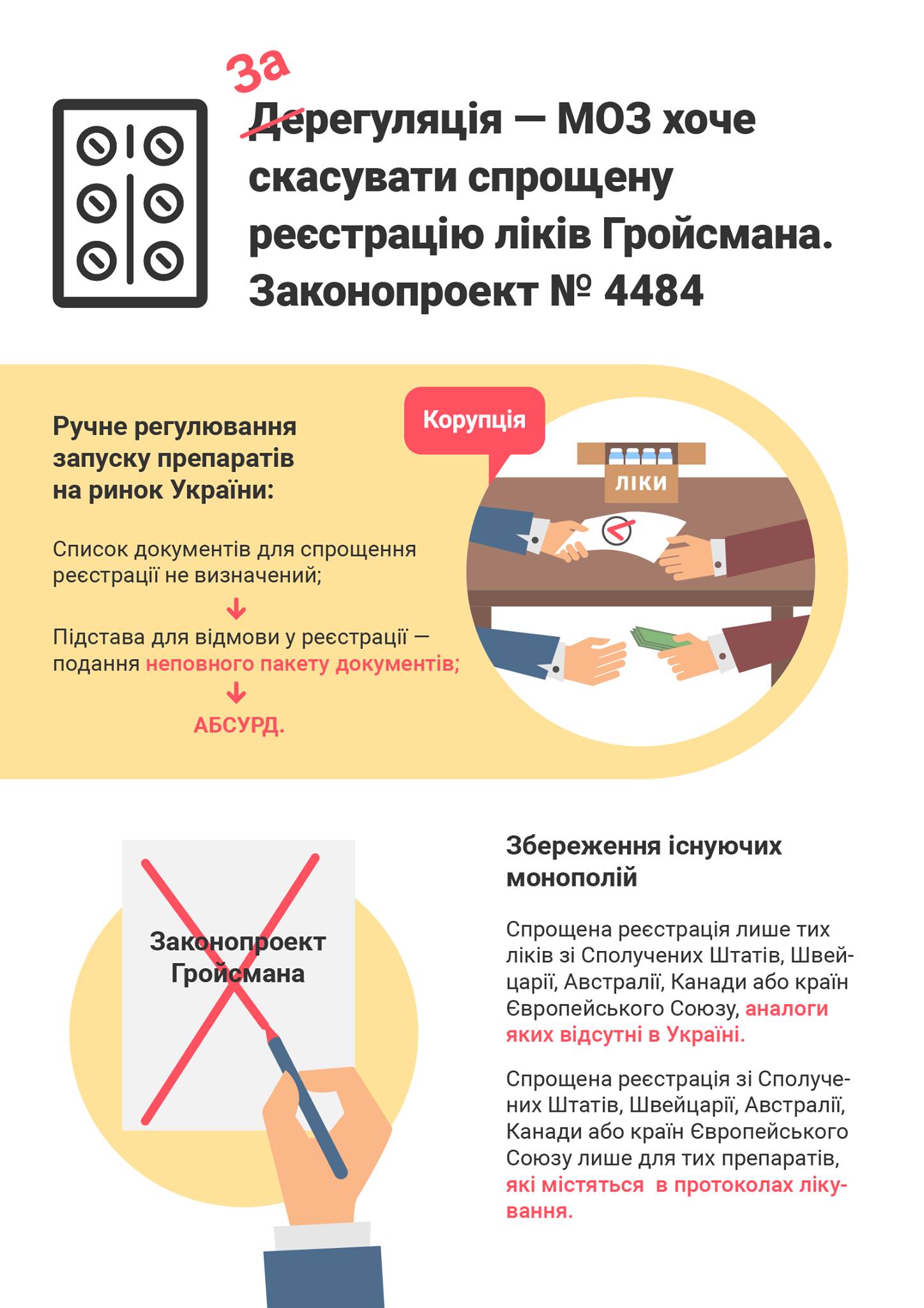 The Ministry of Health intends to annul the simplified authorization of medicines introduced by the Cabinet of Ministers of Ukraine a few weeks ago. These provisions submitted by the MoH sit in the amendments to the government bill No 4484 on the deregulation of the pharmaceutical market in Ukraine.

«The bill as revised by the MoH does not deregulate, but, on the contrary, overregulates the pharmaceutical market. In fact, it creates opportunities for micromanagement of the medicines market authorization. The most terrible thing is that under the pretext of simplification the MoH actually complicates the simplified authorization procedure, which is currently in place for some most important illness categories, such as HIV/AIDS, TB, oncology, hepatitis and orphan diseases. That will never do», indicates Lana Sinichkina, a partner at Arzinger Law Firm.

The point is that the Ministry of Health introduced amendments to the government bill aimed at the deregulation of the pharmaceutical market. By doing this it actually annuls all reformatory standards initiated by the Prime Minister and downplays the very idea of deregulation. In particular, the MoH proposes to restrict a list of medicines with fast track down to those, which have no branded equivalents in Ukraine. In fact, it means holding of the current pharmaceutical market monopoly and entire restriction of the competition. In addition, a patient will be deprived of the right to choose the medicines he/she wants to buy. This means that the main idea of increasing competition in the pharmaceutical market of Ukraine, which would reduce the prices for medicines, was completely annulled by this norm.

Moreover, as against the government bill, the MoH is willing to implement micromanagement for authorization of the medicines from the developed countries, such as the EU and the USA, in the Ukrainian market. It means that in order to apply the simplified procedure the applicant has to submit information and the documents according to the list, which is not specified. In this situation the applicant may be rejected just because his/her package of documents is incomplete!

Additionally, the applicant has to prove to the Ukrainian bureaucrats that the said medicine is included to the regulations and formularies of the developed countries. All this creates freedom for fiddling and additional barriers for the medicine authorization as well as procrastinates the whole procedure.

«As a member of the Okhmatdit Board of Trustees I see with my own eyes how parents and volunteers are desperately searching for the needed medications. In order to provide Ukrainians with access to the medicines we need to simplify the procedures, remove the unnecessary barriers and consequently ruin the monopoly in the pharmaceutical market», indicates Hanna Hopko, the Head of the VR Committee for Foreign Affairs.

It is noteworthy that on April 20 the Cabinet of Ministers of Ukraine approved Resolution No 312, by which implemented the simplified authorization procedure for the medicines from the states with strict regulatory norms, such as USA, Switzerland, Austria, Japan and the EU states. The MoH will annul all achievements of the Cabinet of Ministers. Moreover, this will lead to overregulation of the pharmaceutical market and micromanagement of the entire pharmaceutical sector.

Now serious patients, their relatives and volunteers have to become smugglers. In order to save lives they are forced to illegally import the medicines not registered in Ukraine. The bill initiated by Groisman was really progressive and raised hopes in these people that they would receive an opportunity to buy the necessary medicines in Ukraine for affordable prices. However the MoH amended the bill in a way that it changed its very idea: instead of deregulation it overregulates the pharmaceutical market. In such conditions it is impossible to ruin the monopoly and provide access to the medicines for the Ukrainian patients. Instead of the reformation initiated by the Government we have a rollback, indicates Olga Stefanyshyna, the Executive Director of the Charitable Foundation Patients of Ukraine.

The patients’ organizations and the professional community call on the Prime Minister of Ukraine to renounce the lobbying proposals of the Ministry of Health and return to the initial reformatory version of the bill No 4484.