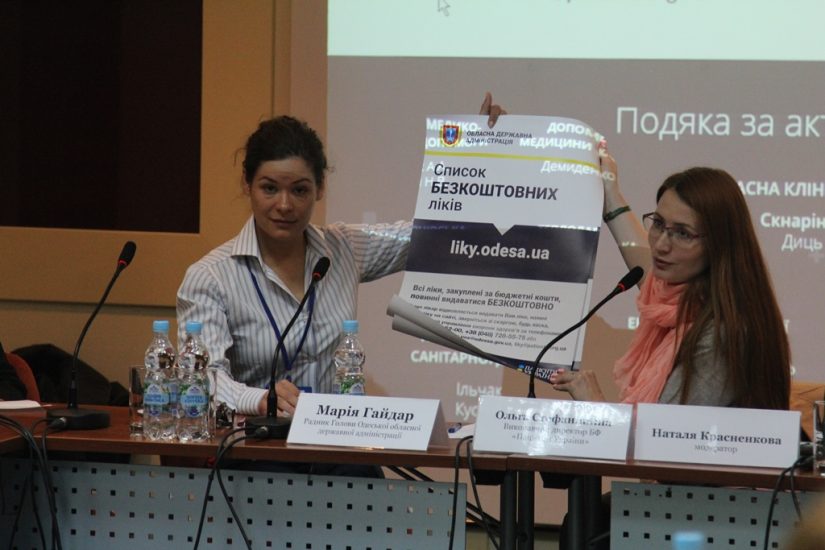 Today at the roundtable «Online services of free drugs: from Odesa to the whole country» the CF «Patients of Ukraine» together with the experts told about open stock lists of left-over medications as an effective way to fight corruption in hospitals at the stage when patients are supposed to receive medicines for which the state has already paid. In particular, the patients’ and anti-corruption organizations discussed the possibility to extend the successful experience of Odesa Oblast to other regions of Ukraine and to provide patients with free medicines.

Every year the state allocates funds for the procurement of drugs, which patients should get for free. However, because of corruption schemes and unscrupulous doctors, patients almost never receive drugs procured by the state.

«Corruption in medicine has always existed on two levels — during the process of drugs procurement by the Ministry of Health and during the process of receiving these medications by patients. We were able to overcome corruption at the national level by transferring drug procurement function to international organizations. The only way to overcome the fraud scheme when doctors re-sell to patients the drugs that have been procured at public expense is making open lists of left-over drugs that are available in every hospital. Due to the political will in Odessa we were able to implement this initiative in a few months. Now it is important to spread this practice to the whole Ukraine, so that every patient has access to free medicines,» — says Olga Stefanyshyna, Executive Director of the CF «Patients Ukraine».

Recall that in September in Odesa the system liky.odesa.ua has been launched — the website any patient can go to and check whether the needed medicine is available in one or another hospital in Odesa Oblast. Within six months nearly 12,000 people benefited from this system. The site contains information on 88 oblast and rayon hospitals in Odesa region. Data are updated weekly, allowing to track the actual availability of free medicines.

«Our main goal is to ensure the access of patients to medicines that have been procured by the state. The system developed within half a year has proved its importance. That is why we continue to support this website so that every patient could exercise his/her right to free medicines,» — states Advisor to the Chairman of the Odesa Regional State Administration Maria Gaidar. «Moreover, we will separately consider each case when a patient asked for medicines that are on the list, but he/she was refused in their provision.»

Also during the roundtable the updated site liky.odesa.ua has been presented. Currently, the site is updated with minimal human intervention and it is automatically synchronized with the accounting databases in hospitals.

Experts shared their knowledge with activists from different regions of Ukraine on how this initiative can be implemented in their oblasts and what resources are needed in order to do that.

Recall that in 2013 the MOH Order #561 as of 06.27.2013 was adopted, which requires all medical institutions to publish information about drug left-overs. Online-systems on medicines left-overs serve as the best tool for executing this order and providing patients with access to free medicines.