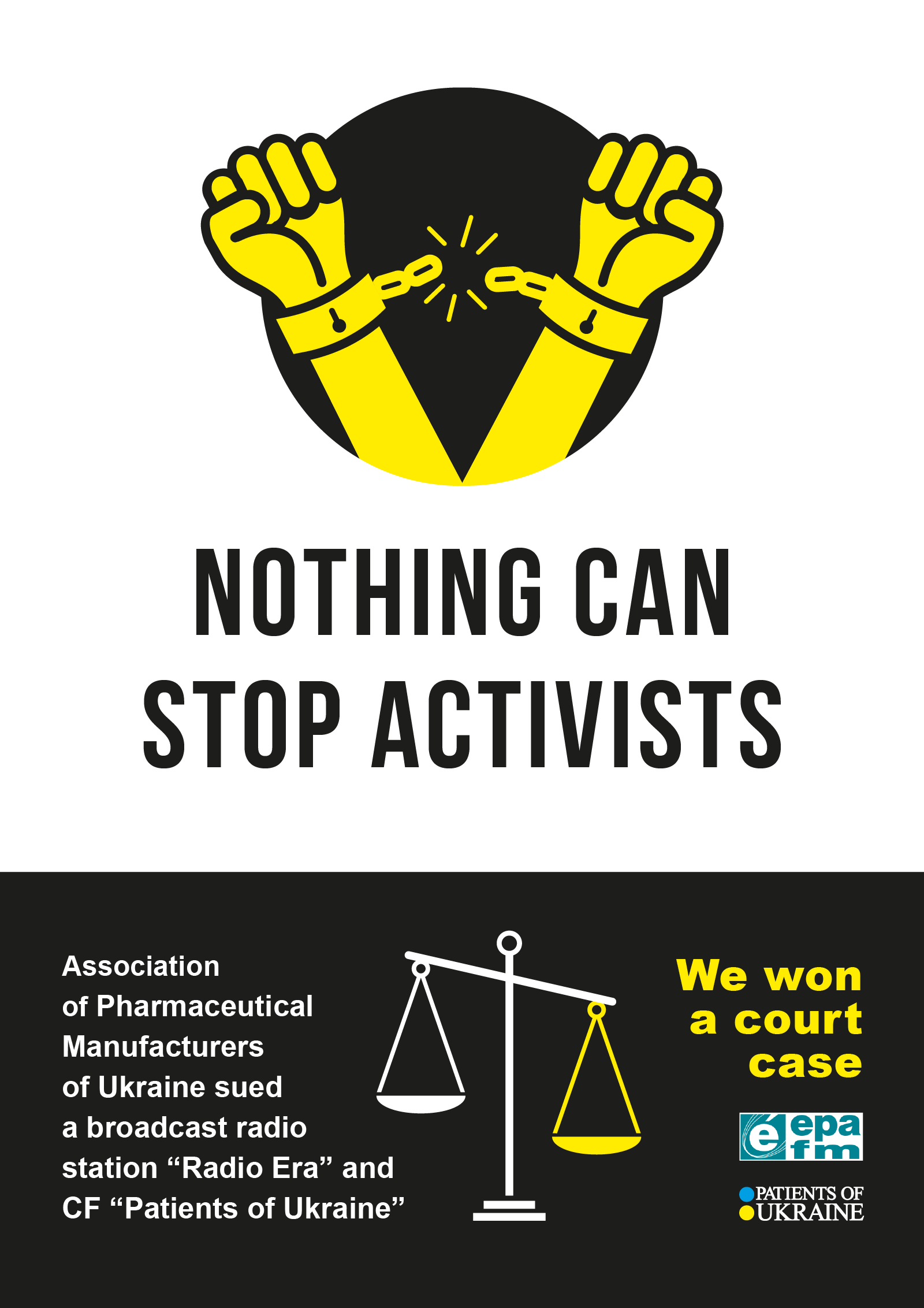 «Radio Era» and the CF «Patients of Ukraine» won the court case filed by the Association Pharmaceutical Manufacturers of Ukraine for allegedly dissemination of false information. The Economic Court of Kyiv published the corresponding decision.

The point is that the Association Pharmaceutical Manufacturers of Ukraine with its President Petro Bagriy, which is the known «frontrunner» of the tenders organized by the Ministry of Health, accused the patients organization and the mass media in dissemination of false information, which allegedly asserted a negative influence on the activities of the Association (Article 201 of the Civil Code of Ukraine).

«This is an absurd situation. The rampant corruption everywhere in Ukraine is a well-known fact. Our country is riddled with the corrupt practices ranging from registration of the medicines to conducting state tenders. Quite telling is the fact that no name of any company was mentioned in the interview, but the Association for some reason took it personally. This is a case, where the guilty mind is never at ease. But in no circumstances anyone will stifle the truth by courts or threats», — says Olga Stefanyshyna, the Executive Director of the CF «Patients of Ukraine».

As a reminder, on November 23, 2015 in her comments to the Radio Era Olga Stefanyshyna, the Executive Director of the CF «Patients of Ukraine» told about a new system of the state procurements of medicines and vaccines through the international organization and touched upon registration of the medicines in Ukraine. Subject of action was the phrase «The Ukrainian companies are accustomed to buy certificates for selling their products and to sell the medicines, whose quality is not confirmed by the laboratory examination».

The court of the first instance rejected the claim of the Association Pharmaceutical Manufacturers of Ukraine. The pharmaceutical manufacturer filed an appeal trying to settle a dispute by the out-of-court settlement. Radio Era and the Charity Fund Patients of Ukraine did not violate any legislative provision, so they rejected the out-of-court settlement.

«Information presented in the program is important for the public and outweighs the potential damage from its dissemination. Moreover, this phrase is extracted from the context of the information program. Talking about imputation of the pharmaceutical market players is overreaction because none of the pharmaceutical companies were mentioned in the Program. It means that no business reputation discredit took place», — reports the representative of the Radio Era.

On March 22 the Kyiv Economic Court of Appeal rejected the claim of the Association Pharmaceutical Manufacturers of Ukraine.

CF «Patients of Ukraine» is the organization, whose goal is to provide all patients of Ukraine with the effective treatment by uniting the activists for influencing the state laws and policy.

As a reminder, the Association Pharmaceutical Manufacturers of Ukraine is headed by Petro Bagriy, who only last year won 95% of the tenders for procurement of medicines for hepatitis patients.