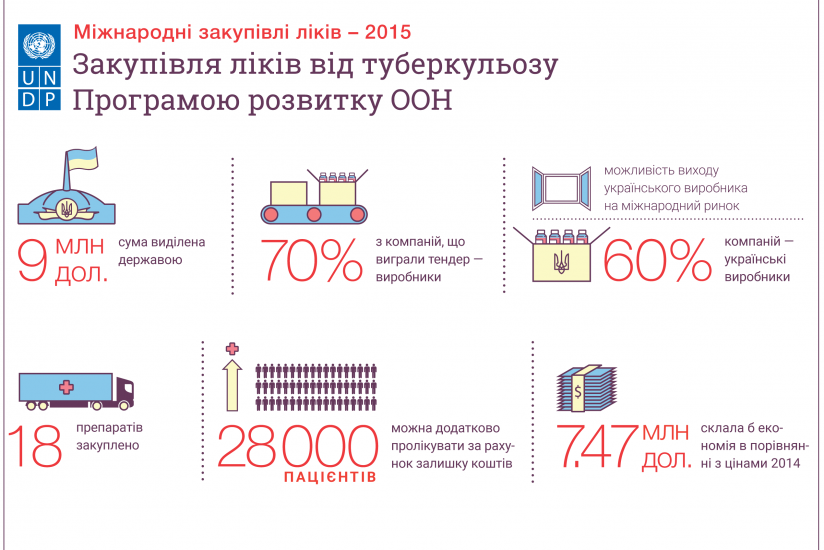 In 2015 public budget for the procurement of antituberculosis medicines has been reduced by approximately USD 3 million in comparison to the 2014 budget. The number of patients in need of treatment, on the contrary, —increased. Nevertheless, in these circumstances international organizations managed not only to purchase the required number of drugs, having spent less money, but even — save USD 1 million. Now, due to gained savings, additionally more than 28 000 patients with sensitive TB will receive treatment. In general, the comparison of the 2014 procurement prices of the Ministry of Health with the current UNDP prices for the same medicines shows that the state would have saved about USD 7 million 476 thousand.

Such calculations are reported by the public organization «Patients of Ukraine» (please refer to infographics).

The Ministry of Health has allocated USD 9 017 693.69 for the procurement of medicines against tuberculosis for 2015 under the health care state program. According to the calculations of the Ukrainian Center for Socially Dangerous Disease Control this amount of public funds covered only 30% of the real need of medications.

In February 2016, the UNDP signed agreements with 7 companies for the procurement of 18 antituberculosis medicines. The total value of contracts is USD 6 720 427. Following the results of the biddings the UNDP managed to procure all antituberculosis drugs in accordance with the order of the Ministry of Health. The exception is the medication Moxifloxacin — for this item negotiations are still in process. The most of the prices for medicines procured by the UNDP are lower than the prices at which the MOH procured the medicines in 2014. In general, 17 out of 18 drugs have been procured at lower prices.

Thus, it became possible to additionally save up to USD 1 million.

«The idea thousands of patients have been fighting for has shown its first results. International organizations lived up to our expectations: medicines have been procured at much lower prices. Previously we had an opposite situation: the number of patients for whom drugs could be procured was constantly reduced in order to squeeze into a tiny budget. This year’s situation is unique: the state has procured the claimed amount of drugs and still extra million for medicines is left. Finally the state budget funds of Ukraine ceased to settle in the pockets of officials and started to work for patients», — states Olga Stefanyshyna, Executive Director of the CF «Patients Ukraine».

For the saved money — USD 1 million — taking into consideration the calculated cost of treatment courses per patient, it is possible to provide treatment additionally to over 28 000 patients with sensitive TB or nearly to 700 — with MDR TB.

«Every year thousands of patients with tuberculosis are left without treatment. This is the reason why the epidemic is spreading in Ukraine — Ukrainians are increasingly suffering from multi-resistant form of the disease. I am impressed by the results of medicines procurements conducted by the international organizations — saving a million dollars and buying medicine for thousands of seriously ill patients using this money — that is what we are fighting for over many years», — states Yulia Kalancha, manager of the «Healthcarers» Project.

According to the contracts the first medicines are to be delivered already in April, the rest — by the end of June 2016. Agents won during the UNDP biddings only under 2 procurement items out of 18 — these are Ukrainian PJSC «Medfarmkomtsentr» and European company «Svizera Europe», others — are domestic and foreign manufacturers.

However, 1 items appeared to be more expensive in comparison to the price of the MOH in 2014:

On October 27, 2015 the Ministry of Health of Ukraine (MoH) and the United Nations Development Programme (UNDP) in Ukraine signed the Agreement for the procurement of medicines for treatment and diagnosis of tuberculosis, HIV/AIDS, pediatric hemophilia and hepatitis B and C.

On December 7, 2015 the UNDP published the first announcement for the procurement of anti-TB drugs.

Following the results of the biddings the UNDP managed to procure all necessary anti-TB medicines for Ukraine, except for the medication Moxifloxacin — for this item negotiations are still in process. The UNDP also procured the drugs one of which is Isoniazid (100 mg and 300 mg tablets and liquid solution 500 mg), which the Ministry of Health of Ukraine failed to procure in 2014.

Some anti-TB drugs procured by the Ministry of Health in 2014 have not yet been delivered to the full extent (Cycloserine, Capreomycin).

For the objective comparison of medicine prices we compared the MoH prices in 2014 in dollar equivalent (at the exchange rate on the interbank market, according to the NBU) at the time of the submitting tender proposals by the participants excluding tax, because international organizations do not pay taxes on medicines that they supply. 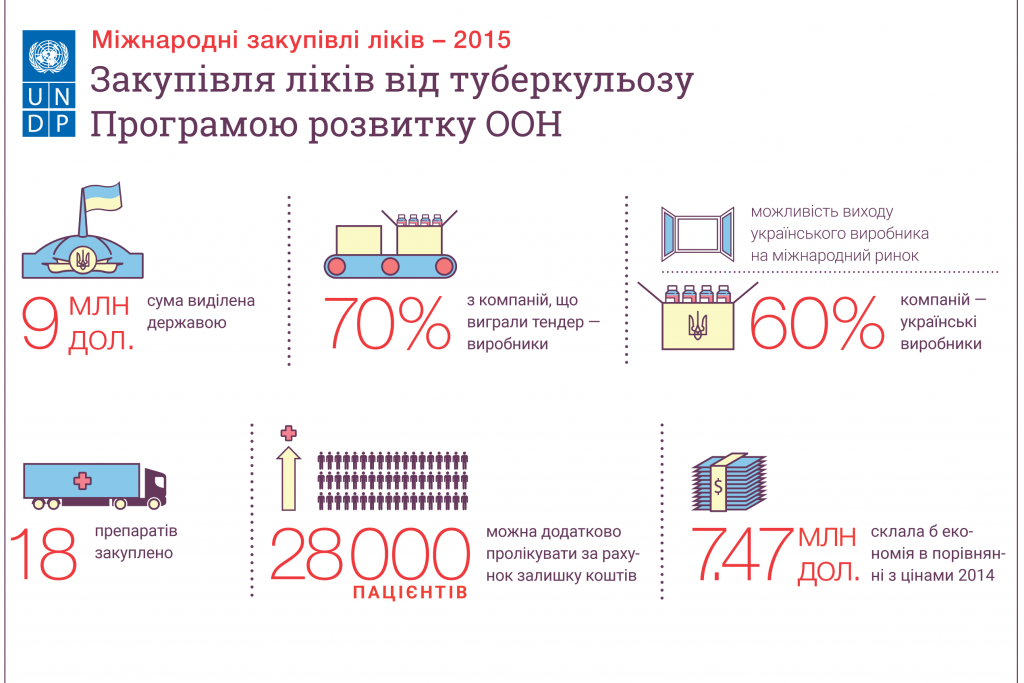