Condemned patients are picketing the Cabinet of Ministers

Condemned patients are picketing the Cabinet of Ministers 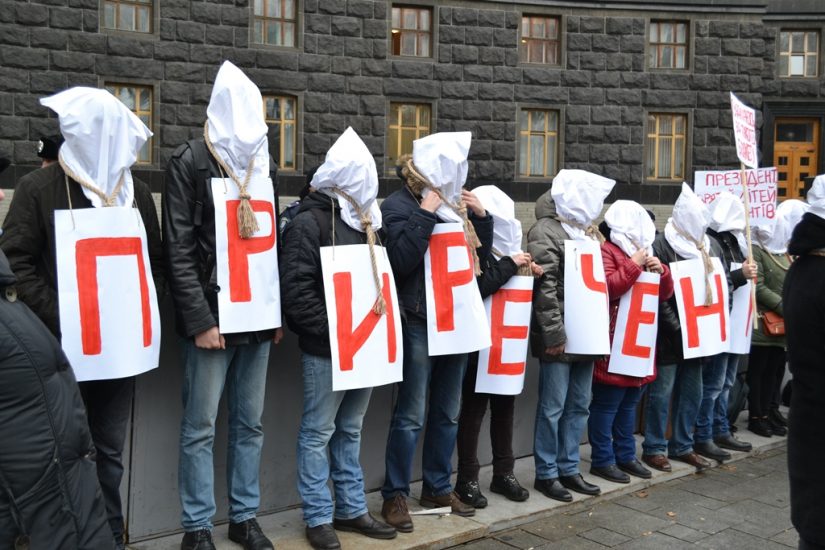 Today more than a hundred patients with cotton hoods on their heads and nooses around their necks lined up in front of the building of the Cabinet of Ministers. In this way they wanted to demonstrate to the Government, what the adoption of the draft budget for medicine procurement for 2016 is going to lead to: people with life-threatening diseases are condemned to die. Seriously ill Ukrainians from Kyiv, Chernihiv, Rivne, Cherkasy, Zhytomyr, Volyn and Ternopil Oblasts came to take part in the protest action “Condemned” to assert their right to life.

According to the MoH calculations, at least UAH 8.1 billion should be allocated in the Budget to provide patients with the necessary treatment – precisely this amount of necessary funding is stated in the additional form of the Ministry of Health budget request. However, only UAH 3.9 billion is allocated in the draft budget for the next year for medicine procurement, which is even less than previous year, regardless of hryvnia devaluation by two times. With such a funding, hundreds of thousands of patients with such diseases as HIV/AIDS, hepatitis, tuberculosis, renal failure, children diagnosed with cystic fibrosis or hemophilia risk to become disabled or die.

“I really want to have children. However, I was diagnosed with viral hepatitis B and C and to give a birth to a child means consciously infect him/her with these viruses. – says 25-year-old Iryna, who has been living with hepatitis B and C for 20 years. – This year the Government will provide with treatment only one out of ten patients with hepatitis. I’m afraid not to be placed on the list of chosen patients whom our Government will grant the gift of life”.

According to patients’ estimates, the real treatment need is much greater. For example, to treat children with cystic fibrosis, a serious genetic disease that affects lungs and pancreas, it is needed UAH 23 million instead of the allocated UAH 8 million. It means that the funds allocated in the draft budget for 2016 will be enough to provide with needed medicines only 34% of young patients with such a severe disease. The rest of the patients, and these are children, are condemned to a horrible and slow death from lack of oxygen.

The situation with patients sick with HIV/AIDS, tuberculosis, viral hepatitis, rare and oncological diseases is not better. “Deadly” draft budget for 2016 provides with medicines on average no more than 30% of patients. 9 out of 10 patients with hepatitis and 3 out of 4 HIV-positive Ukrainians will remain without treatment. Lives of millions of patients depend on whether they will be heard by officials.

“When European experts with wide-open eyes ask me why our Government has so irresponsible attitude to patients, why they do not care about how to overcome AIDS, tuberculosis and hepatitis epidemic, and how to decrease cancer mortality – I do not know what to answer”, – states Olga Stefanyshyna, the Executive Director of the CF “Patients of Ukraine”. – This year a unique situation occurred: the Ministry of Health has submitted a budget request to the Ministry of Finance which stated the real treatment need. This need amounts UAH 8.1 billion. Everybody hoped that Ms Yaresko will hear it, but all in vain. So we decided that officials have to see with their own eyes what do these numbers actually mean”.

Currently not only sick people but also healthy Ukrainians are in deadly danger, because soon they will become victims of spread of epidemics. Ukraine ranks first in Europe for the spread of viral hepatitis and the HIV prevalence rate.

“Due to the fact that the funding for 2012 for the treatment of HIV/AIDS has been increased almost twice, we managed to stop the spread of the epidemic and reduce mortality”, – claims Dmytro Sherembey, the Chairman of the All-Ukrainian Network of People Living with HIV/AIDS. – If the Government doesn’t allocate the needed sum of money for treatment, we will have a new outbreak of AIDS. In addition, the major international donors will simply stop helping Ukraine in overcoming the epidemic. Their message is simple: we have been providing Ukraine with funds already for 10 years. Every year the Government promises to increase public expenditures, but it does not. Ukraine has to fulfil its commitments both to the international community and to seriously ill patients”.

It should be noted that only 6% of medicines that Ukraine procures via public tenders are produced in our country. Other 94% come from abroad. Last year the budgetary calculations were made taking into account that the value of Ukrainian hryvnia was UAH 15 against the US dollar. Currently hryvnia devaluated by 66% and the exchange rate is UAH 25 per one dollar, which will significantly affect the volume of procured medicines. The amount of money allocated for treatment programs in the Draft Budget for 2016 almost equals to that approved for 2015.

In Ukraine every day around 1600 patients die due to the lack of medicines. 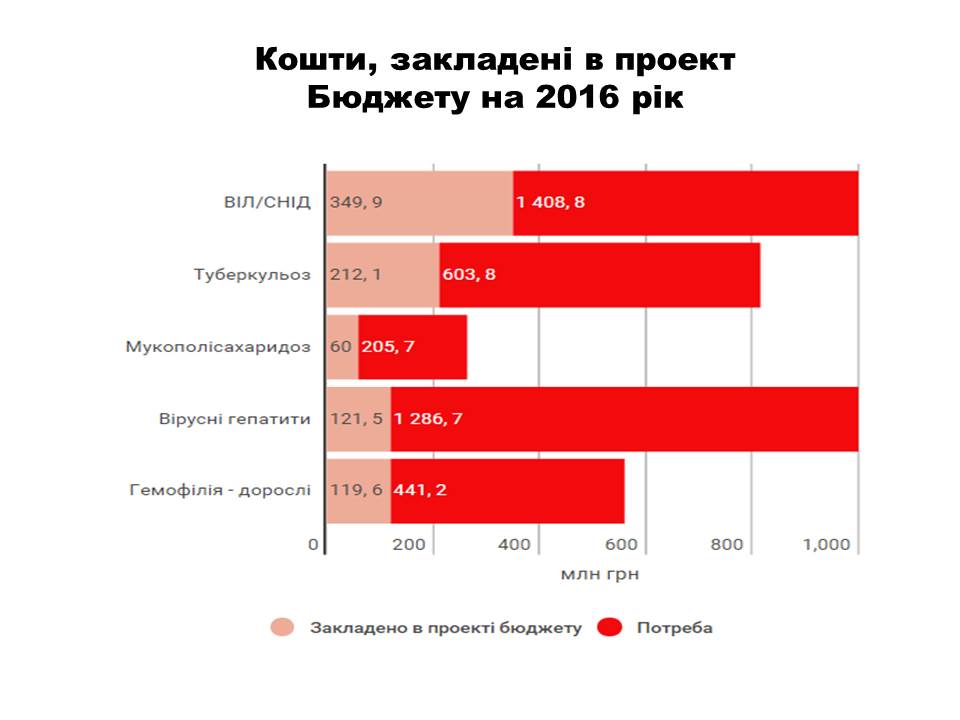 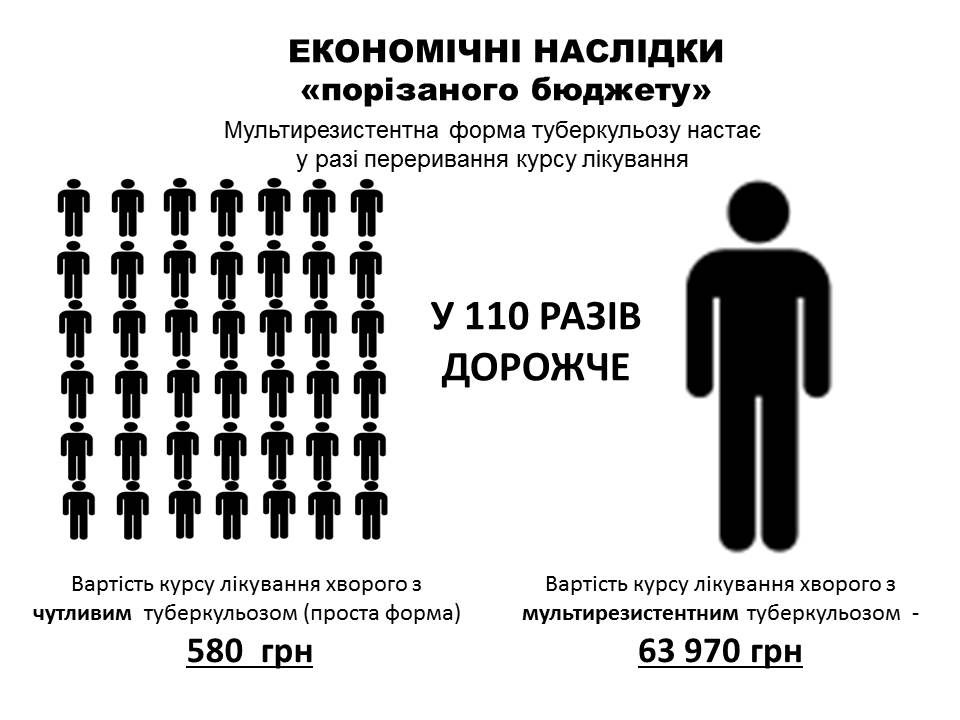 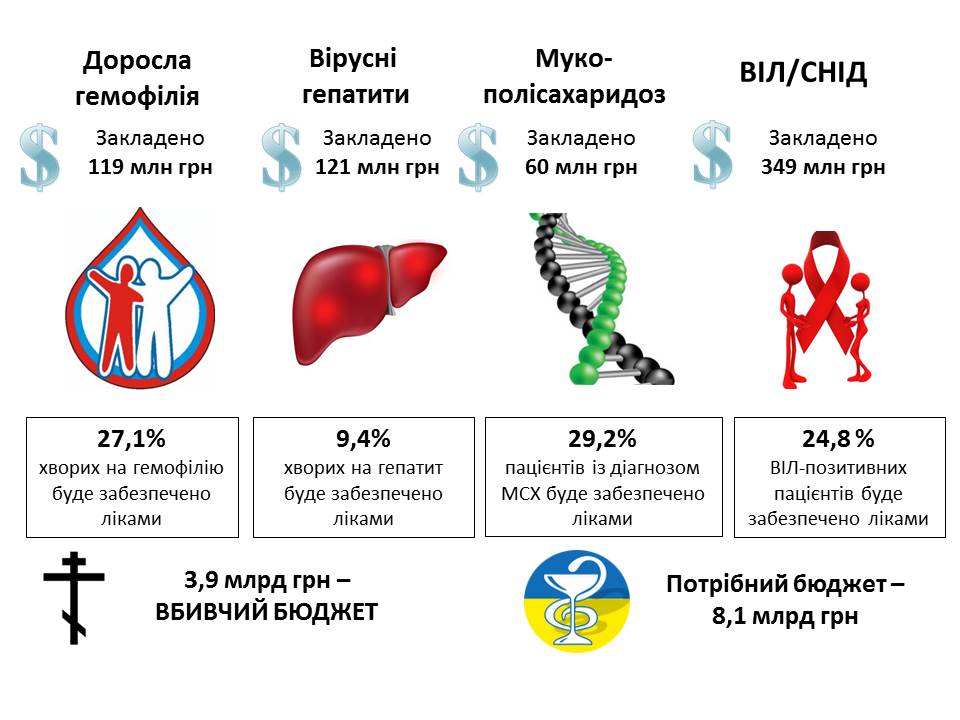