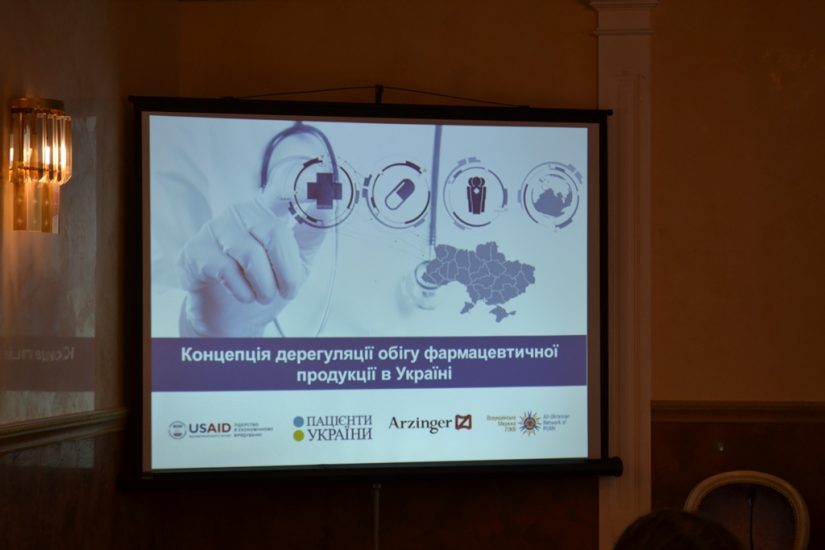 Today the CF “Patients of Ukraine” together with MPs and experts of the law firm “Arzinger” presented the Concept of reforming the pharmaceutical market of Ukraine. It provides for, in particular, the abolition of duplicated licensing procedures, simplification of regulation, reduction of the respective terms and maximum transparency of all processes related to the regulation of pharmaceutical market.
According to statistics, in Ukraine 80% of city dwellers and 82% of rural area inhabitants cannot buy medicines due to their high cost. One-third of families, with a seriously ill family member, live below the poverty line due to the high cost of medicines. Corruption schemes, high cost of drugs, absence of necessary medicines in Ukraine – all this can be resolved due to deregulation of the pharmaceutical products circulation in Ukraine.
“In order to register a medical product in Ukraine you need to spend at least a year and a prodigious sum of money for bribes – says Olga Stefanyshyna, Executive Director of the CF “Patients of Ukraine”, – For years in Ukraine obstacles were created, additional permits and licenses were demanded so that officials could make money on it. As a result, a lot of vital medicines are simply not available in Ukraine, because some companies that produce medicines in Europe or in the USA are not willing to give bribes to enter Ukrainian market. They are not willing to wait in lines for years to prove the quality of their medicines, which has already been recognized in other civilized countries. This significantly influences the availability of medicines for treatment of certain diseases such as, for example, renal failure, oncology and others, rather than drugs on mass market. In Ukraine prices on some drugs are 2-3 times higher than in neighboring countries”.
As of today 9,9 thousand names of drugs have been registered in Ukraine, while in France – almost 16 thousand. For a range of mass consumption drugs prices are significantly higher than in neighboring countries. In particular, the most common drug to prevent allergic reaction “Loratadine” costs in Ukraine on the average 2 times more than in Georgia, and 3 times more than in Hungary. Similar situation is with Fluconazole based antifungal medications. Prices in Georgia and Hungary are on the average 2-2.5 times lower.
Deregulation of the pharmaceutical market is one of the main stages of healthcare reform in Ukraine, that is fixed in one of the action points of the Coalition Agreement, the Government’s Action Programme and the Presidential Decree “On Strategy for Sustainable Development “Ukraine-2020”.
“In order that every citizen of Ukraine could buy high quality and affordable medicines at the chemists, doctors could prescribe to their patients effective treatment in compliance with European clinical protocols, one more step on the approximation of health care system of Ukraine to European quality is made, monopoly and corruption in pharmaceutical industry are eliminated – we should deregulate the circulation of pharmaceutical products in Ukraine. – states professor Olga Bogomolets, Head of the Parliamentary Committee on Public Health. – Being a doctor I could say that one of the reasons why treatment of patients is more effective in Europe, – is significantly wider range of drugs which enables to prescribe an individual treatment regimen and select specific medicines to combat the disease. After a series of public discussions, we will register a draft bill in the Parliament, and I will use my best endeavours to consolidate not only the Committee, but also the entire Parliament to put such needed changes into life”.
Ukraine has already undertaken international obligations in the area of deregulation. The relevant provisions are fixed in the Ukraine–European Union Association Agreement and a number of other documents. The presented Concept is fully harmonized with the EU legislation.
“Now the whole world is supporting Ukraine. As from January 1, 2016 the Deep and Comprehensive Free Trade Agreement between Ukraine and EU comes into effect. Moreover, the WTO Agreement on Government Procurement has already been signed, and from now on Ukraine will have a possibility to take part in public procurements in other countries. We should simplify procedures removing useless and corrupt mechanisms on our markets, and ensure transparent and easy doing business in Ukraine”, – claimed Hanna Hopko, Head of the Parliamentary Committee on Foreign Affairs.
The event was attended by the Deputy Minister of Justice Gia Getsadze and the Head of the State Regulatory Service Ksenia Liapina, who expressed support for the Concept of deregulation of pharmaceutical products circulation in Ukraine.
The idea of the market deregulation is also supported by specialized institutions – the Ministry of Health and the Ministry of Economic Development and Trade.
By the end of the year public discussions of the Concept with all relevant organizations, business associations and experts will be held.