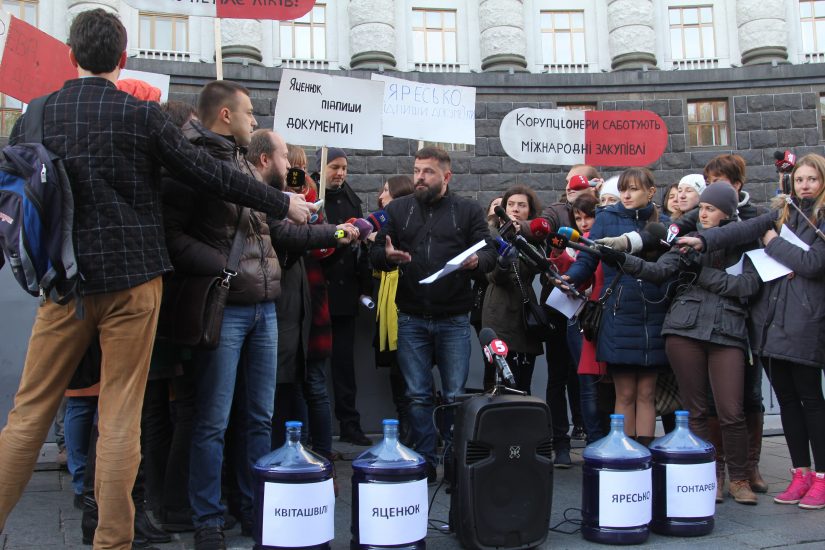 Today patient and anticorruption organizations brought to the Cabinet of Ministers 4 barrels with ink for Arseniy Yatsenyuk, the Prime Minister of Ukraine, Alexander Kvitashvili, the Minister of Health, Natalya Jaresko, the Minister of Finance and Valeriya Gontareva, the Head of the National Bank. Due to the action “100 liters of ink for the Cabinet of Ministers” activists demanded to sign regulations to launch public medicines and vaccines procurements through international organizations.

“If the Prime Minister and the Government do not have enough ink to sign several documents, we brought them plenty of ink, as hundreds of thousands of patients’ lives depend on them, – says Dmytro Sherembey, the chairman of the CF “Patients of Ukraine.” – We understand that behind this bureaucracy and unwillingness to obey the laws, there are corrupt people, who were making profit and deceiving Ukrainians for many years”.

“The transfer of medicine procurement to international organizations has been sabotaged by the corrupted system already for six months. Although the necessary law was adopted as far back as March, giving the Government enough time for its implementation, none of the agreements has been signed yet – states Yegor Sobolev, the head of the Verkhovna Rada of Ukraine Committee on Corruption Prevention and Counteraction.” – Procurement of medicines through international organizations will provide for saving up to 40% of public funds. Otherwise, the sum of UAH 2.5 billion will be stolen again, and patients will be left without medicines. We have continuously raised this issue at Committee meetings and I personally met with the Minister to speed up the process of transfer of procurement function to international organizations. But, despite the loud statements of the Minister and the Government, the issue is still not resolved,” – he adds.

Transfer of medicine procurement to international organizations is a part of the Coalition Agreement. As far back as March, the Verkhovna Rada of Ukraine voted to pass the respective law #269-VIII, which provides for transferring procurement function to international organizations under seven programs: vaccination, HIV/AIDS, tuberculosis, hepatitis, oncology, pediatric hemophilia and nutrition for children with orphan diseases. This package of bills was recognized by the President of Ukraine as top-priority bills. The relevant bylaws were supposed to be approved by May 25, 2015. For almost half a year, because of bureaucracy and officials’ unwillingness to make the process of medicine and vaccines procurement transparent, the Cabinet of Ministers has been sabotaging the development and signing the corresponding documents.

“The most effective way to fight corruption is to provide maximum transparency during tenders and public procurement. – notes Olena Shcherban, senior lawyer from the Anti-Corruption Action Centre. – Procurement of medicines through international organizations is the only efficient instrument that will allow overcoming corruption schemes in the Ministry of Health. The Cabinet of Ministers lacks the political will to sign the relevant bylaws, for these documents could have been developed and adopted before the beginning of the summer. Such sabotage is nothing other than a desire to save the corruption schemes during procurement of medicines and vaccines,” – she added.

As early as in August, the Ministry of Health announced that such international organizations as UNDP, UNICEF, Crown Agents will procure medicine for Ukrainian patients for UAH 2.5 billion. However,  not a single contract has been signed until now and therefore the health and lives of patients are under threat.

“Through intentional sabotage of tenders, officials shorten the life of my child. – claims Nina Astaforova-Yatsenko, the head of the CF “Children with hemophilia”.” – How many more children will suffer because of thoughtless officials, ill-considered policy and corruption schemes?”– asks the activist.

If the relevant bylaws and agreements are not signed in the coming week, the international organizations will find themselves in such time and formal frameworks that will not allow them to timely procure the necessary medicines and supply them to Ukraine.