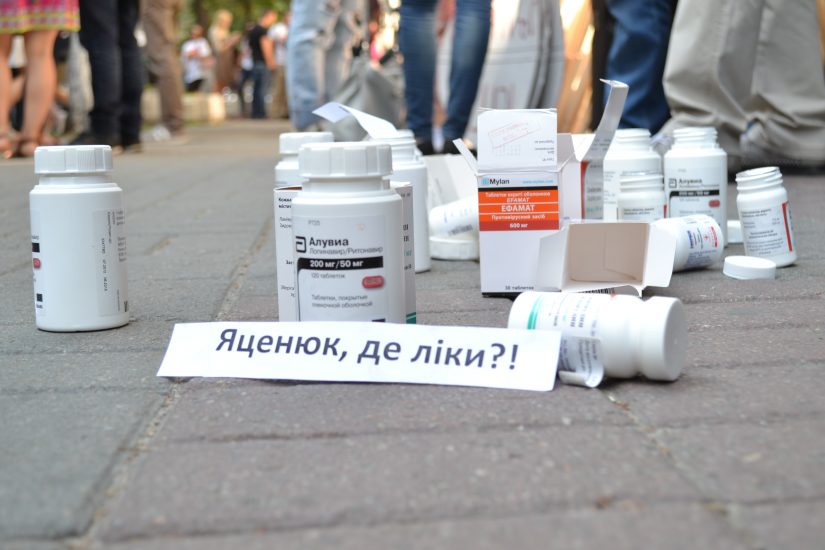 Up to 200 patients with HIV/AIDS lined up for medicine in front of the Cabinet of Ministers. This was to show the absence of medicines for 30 thousand HIV positive Ukrainians. The patients sent an open letter to the Prime minister of Ukraine with the demand to take the problem with drugs under his personal control.

“Last month we approached the Prime minister of Ukraine with the appeal to prevent the catastrophe of no medications for 30 thousand HIV people, – says Dmytro Sherembey, Chairman of CF “Patients of Ukraine”. – Despite the promises the government has still not solved the problem!!! Ukrainians who had to receive medicines will be left with no treatment”.

Last month the activists and HIV positive people held an action in front of the Cabinet of Ministers. They set up a symbolic cemetery. The activists demanded to solve the issue with the company “Vector Pharma”/ “Phiolis”. The company was obliged to supply patients with medicines, but did not do it. “Vector Pharma”/ “Phiolis” has received 100% prepayment from the State at the end of December of 2014. It had not delivered any medications which were paid for in advance.

“We warned the Minister of Health Alexander Kvitashvili about the potential catastrophe a few months before it became clear that the company will not supply patients with drugs, – states Vitaliy Shabunin, Head of the Board of the Anti-Corruption Action Centre. – However MoH did not solve the problem and hence the company did not deliver medicines”, – adds Vitaliy

At the last meeting of the Government the Minister of Health Alexander Kvitashvili ignored the situation with the medicines for so many terminally ill Ukrainians who will die without treatment. The Minister reported that the problem was solved as the company “Vector Pharma”/ “Phiolis” yet supplied 8% of the necessary medicines stated in the contract.

“This is a total disaster, which we didn’t have in Ukraine since 2003, when the first programs of HIV/AIDS treatment just started – says Volodymyr Zhovtyak, chairman of All-Ukrainian Network of People Living with HIV/AIDS.  –  The problem has not been solved, in fact, it has worsened. Through our savings we managed to compensate the lack of medications for our patients for 1.5–2 months. But since the end of July patients who are on government treatment and those who are provided with  treatment by our organization through support of the Global Fund will remain without drugs at all, if the situation with “Vector Pharma” is not resolved”, – adds Volodymyr Zhovtyak.