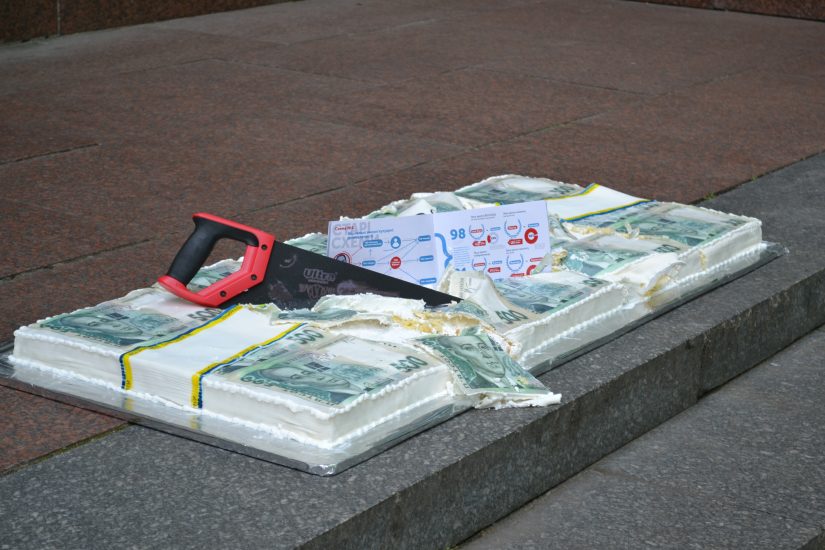 “This is continuation of the yearly carve-up of money, – says Dmytro Sherembey, Chairman of CF “Patients of Ukraine”. – The only way to procure quality medicines for much cheaper price for patients is to transfer drug procurement to international organizations. However the Ministry decided not to abandon the annual “inner carve-up” of billions allocated for the medications and to split them up between its pharmaceutical mafia again.

During the action the activists have unveiled analysis of prices received from few international organizations included in the Law no. 2150 (269-VIII). Some medicines Ukraine procures 22 times more expensive than international community. For instance, one of the international organizations, included in the Law, proposes to procure an antibiotic “Clarithromycin” (under the State Program for Oncology) for USD 8.8 while the Ministry of Health procured the same drug for USD 196.00 the previous years. Another example is “Moxifloxacin” for TB treatment – the Ministry procures it for USD 301.5 when the international agency proposes to purchase it for USD 44.6. The same agency can procure ”Capreomycin” (which is included in treatment schemes for TB) for USD 4.35 which 3 times cheaper than MOH’s USD 13.75.

“Had the drug procurement been transferred to the international organizations this year, the medicines would have beed purchased for 30% cheaper, and consequently more patients could have been treated, – states Hanna Hopko, MP. – Unfortunately during the years of independence the stronger political will to reduce the abuse during the drug procurement has not appeared”. – She added.

“The Ministry has made it clear to all of us that it is not going to transfer drug procurement to international organizations as well as to fight corruption schemes which have existed within the Ministry for years now. It forces us, as Coalition’s MPs, to raise the issue of violation of the Coalliton Agreement”, – said Oksana Korchynska, First Deputy Chairman of the Committee on Public Health.

According to the NGO “Anticorruption Action Center” in Ministry of Health tenders are divided between same companies every year. “In 2014, six companies divided 95% of medicines procurement for patients with tuberculosis, AIDS, hepatitis and oncology – says Vitaliy Shabunin, chairman of the NGO “Anticorruption Action Center”.  – 4 of 6 companies are controlled by one person. Overpayments on these medications are enormous. Yes, only for 8 drugs for oncology government overpays at least 62 million – according to estimation of our organization. And none of the schemes that have worked in the Ministry was liquidated, so we can certainly claim that this year we will have the same picture unless medicines procurement is transferred to international organizations.

Moreover, because of the scandal about unfair tenders for the medicines procurement in 2014, 30 000 HIV-positive patients are left without vital medication. The reason for this are the contracts signed at the end of the year between Ministry of Health and “company-pad” – “Vector Farma”, which received 100% prepayment from the government in December, and has not supplied antiretroviral drugs to Ukraine. Such schemes can be completely destroyed by involving international expertise for procurement of medicines and vaccines with the Ukrainian state funds.

Patients and anti-corruption activists also sent letters to the President of Ukraine and heads the Coalition factions demanding to intervene into this situation and not let the Ministry of Health block the transfer of medicines procurement to international organizations.

It should be noted that because of the complete failure of public tenders for the medicines and vaccines procurement in 2014, local patient organizations together with legal professionals in shortest time designed, parliament adopted and the president signed laws number 2150 and 2151 (269 and 332-VIII-VIII) that allow Ukrainian Government to procure medicines and vaccines through international organizations. The purpose of this initiative: to provide Ukrainian patients within the state budget of Ukraine with quality medicines in the shortest period, breaking the blatant corruption in public procurement – up to 40% which is almost 2 billion hryvnias.