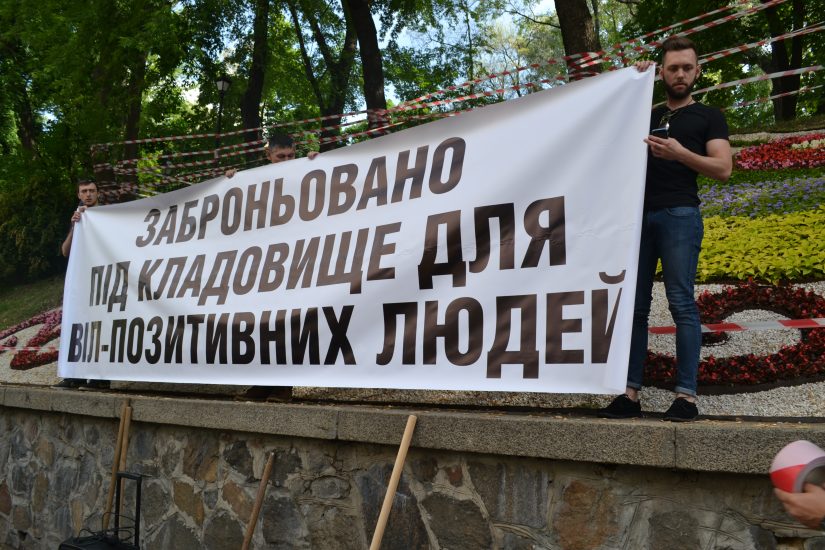 Today the patients with AIDS held an action “Cemetery instead of drugs” and set up a symbolic cemetery on the slope in front of the Cabinet of Ministers of Ukraine, fencing off the place for graves. In this way they wanted to attract the attention of the Prime Minister of Ukraine Arseniy Yatsenyuk to the fact that in 3 weeks 20 000 HIV-positive people will be left without medicines.

“We appeal to the Prime-Minister of Ukraine and the Government to prevent the catastrophe, as already in 3 weeks 30 000 HIV-positive patients with be left without treatment. This year alone the Network has saved the lives of 66 000 patients by procuring medicines for the first quarter of 2015, – says Volodymyr Zhovtyak, Head of the All-Ukrainian Network of PLWH. – But today we are again in a situation that can be solved only by the political will of the state leadership and by speeding up the process of drug procurement”, – he added.

According to the information of Network of PLWH on the 15th of March patients with HIV will run out of the medications. By the end of June this fate awaits all who are on the treatment programs that include drugs such as Lamivudine, Zidovudine / Lamivudine, Efavirenz. There are almost 30 thousand such patients in Ukraine.

The reason for this acute shortage of medicines is a decision that has been  taken last year. In 2014 the Cabinet of Ministers of Ukraine has introduced  the “lobbying norm” to the Resolution #117, which allowed suppliers of medicines to get 100% prepayment and postpon of delivery for 6 months.

Now drugs, which the patients should have received within the state program by the end of 2014, can be delivered only in June of 2015. According to the patients, unscrupulous companies are not going to supply medications despite having received money in advance.

«We have reliable information that all the medicines that should have been delivered by company «Vector Pharma» won’t be delivered to Ukraine. We will run out of drugs before the expected date of delivery which is June 1oth, – says Dmytro Sherembey, Chairman of the Board CF «Patients of Ukraine». – The situation should be solved urgently, while there is time to fix it and deliver medications to hospitals before the deadline. Last year, the Cabinet of Ministers made a terrible mistake which now costs lives. It must be solved immediately», – he adds.

It should be noted that instead of supplying drugs, company «Vector Pharma» has filed a suit against the Ministry of Health. The owners of the company received 52 million 600 000 hryvnias prepayment in December 2014 and now demand from government to compensate the increase of foreign currency. «It’s nonsense, considering that the  company received 100% prepayment and could have pay for the production of medications already six month ago, or to convert this money into the currency, – says Vitaliy Shabunin, Chairman of the Board of «Anticorruption Action Center». – The steps that the company made is nothing else than marking time in order to not supply medications», – he added.

While the Ministry of Health will be dealing with courts, patients with HIV/AIDS won’t receive their treatment. That is why they have come to the Cabinet of Ministers of Ukraine with the demand to help to solve the situation at the highest political level and deliver the medications until the 10th of June.  13 regions of Ukraine has also joined the action, including: Odessa, Rivne, Dnipropetrovsk, Kharkiv, Kirovograd, Kherson (Skadovsk), Kramatorsk, Mariupol, Zaporizhia, Severodonetsk, Chernigiv, Chernivtsi, Lviv.