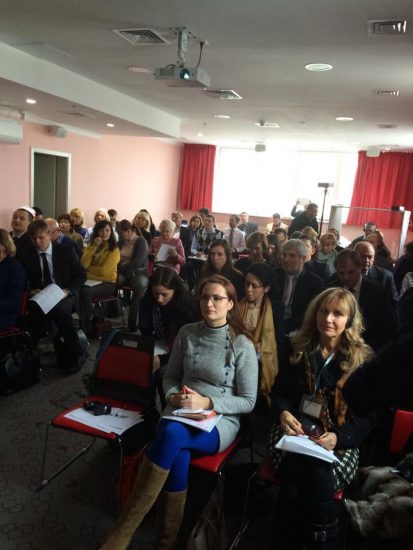 With the participation of the new Health Minister the discussion of the draft strategy of the Ukrainian healthcare system reform has started. According to the authors of the project the cornerstones of the reform are: liberalization of medical services market, reduction of overregulation of the health care sector, establishing the efficient mechanism of state funds reallocation aimed to pay for the services provided to a patient, and not for the maintenance of medical buildings (currently 75% of state funds are spent on keeping the medical buildings and hospital beds). After the sector is reformed this money will be spent for the doctors’ services meaning the implementation of the principle “money follows the patient”.

“In Ukraine people demand changes and already in 2015 decisive steps should be taken to start them. This approach has proved to be successful in Georgia, – said Alexander Kvitashvili, the Minister of Health of Ukraine, – we will immediately start the reform of the health care sector management, examine the possibility of optimizing the hospital network, introduce important initiatives on procurement and access to medicines”.

Studies show that every second Ukrainian refuses to visit a doctor because of the inability to pay for the treatment. “This is not normal when in the country with free healthcare, which is guaranteed by the Constitution, half of the population can not afford it, – states Volodymyr Kurpita, the Head of the Expert Council of the Strategic Advisory Group on the reform of the health care system. – And this is because our government ineffectively spends money on medical system created in Soviet times. In fact, the lion’s share of money is spent on maintenance of sometimes even empty premises and beds, and meager staff wages”.

One of the important steps of the draft reform is to optimize the network of health care facilities which are distributed unevenly in Ukraine. Our country is leader in the ratings by the number of beds per capita: in Europe there are on average 500 beds per 100 thousand population, in Ukraine – 950.

Experts suggest to introduce the autonomy of medical institutions, which will remove the burden of paying for utilities from the state and help attracting investments into this sector. In addition, it will allow bringing the number of hospitals into line with the real needs of people in a natural way. Released budget funds are suggested to be used for enlarging access of rural population to the modern district hospitals, in particular by building roads and transport.

In rural areas, where currently 30% of the population of Ukraine lives, family physicians will work as private entrepreneurs. Payment for their work will be handled using a mixed system. The community will be able to control the quality of the work and payment for the doctor’s services, and will have the right to terminate the agreement with him if necessary.

“In Ukraine we have the Soviet system based on excessive government regulation of everything – starting from premises to staff, – says Oleg Petrenko, the expert of the Strategic Advisory Group. It has to be broken fundamentally. Today the village doctor must work in a medical station, a doctor must have a nurse to assist, even if he sees only 1 patient per week. Each medical station must have a toilet, and where there is a toilet, there must be a cleaner. As staff of the medical station already consists of more than 3 persons, there must be an accountant, and where there is an accountant there is a safe with money and therefore the security must be hired. In this way staff consisting of 1 doctor grows to 5 people”.

Experts say that the optimization of hospitals should not be performed through administrative methods – it will be a logical consequence of the introduction of autonomous medical institutions and the transition to a system of payment for services. Currently no head doctor has a right to reallocate available hospital funds in the most efficient way. The money is spent not on the departments or areas that need them most, but according to the norms inherited from the Soviet era. For example, when a hospital is run out of money for gasoline for ambulance vehicles, the head doctor may not reallocate funds from another department, where there are vacant beds and there are no patients. After granting greater autonomy to hospitals they will be able to decide which departments are fully occupied and need additional funding, and which can be closed. The same applies to wages. More qualified doctors can get higher salary, while those who do not have patients standing in queue to get an appointment – no. Thus the structure of hospitals and doctors will be adjusted to the real needs of people.

Currently the draft reform is at the stage of public discussion, and not only sector experts and doctors can join it, but anybody who wants to. Discussions will continue until the end of January 2015 and will be held both in Kiev and in the regions.

The draft reform has been developed by the Strategic Advisory Group on the reform of the health care system in Ukraine under the Ministry of Health with the support of the International Renaissance Foundation.

The group consists of 12 international and Ukrainian experts.