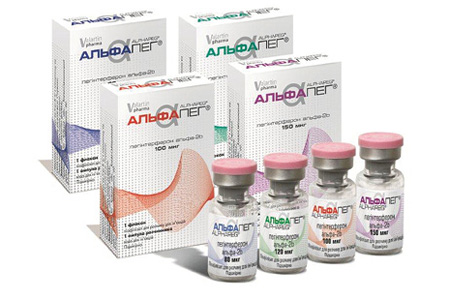 Scandalous drug for pseudo-treatment of hepatitis — ALPHAPEG (peginterferon alfa-2b) manufactured by Valartin Pharma LLC has been banned in Ukraine. Public Enterprise “The State Expert Center” has ordered to deregister the drug and prohibit its use. The corresponding order has already been issued by the Ministry of Health, and signed as a “farewell” by the now former acting Health Minister V. Lazoryshynets. So this chapter in the battle of patients against unscrupulous pharmacists for decent treatment was eventually closed.

“Of course, the manufacturing company, which has been denied the license for this drug, will not distribute press releases on the matter. We will undertake this mission and bring the case to the end — inform the public about the ban. This is because we as patients have been demanding already for several months to remove the untested and therefore “deadly” drug Alphapeg from the market, especially from the state procurement”, — says the head of the CF “Patients of Ukraine” Dmytro Sherembey.

“Corrupt practices in medicines registration, which was also exercised in the ALPHAPEG case, was widely used under the previous government. We hope that with the new Health Minister the situation will change fundamentally, and “light fingered” pharmaceutical companies will cease to set up experiments on Ukrainian patients”, — stressed Olga Stefanyshyna, the executive director of the CF “Patients of Ukraine”.

The readers are reminded that 4 months ago the activists started to sound the alarm regarding the absence of the appropriate expertise of the hepatitis drug. Therefore Valartin Pharma LLC has publicly accused Dmytro Sherembey and two journalists of disclosure of confidential business information about ALPHAPEG drug and filed several suits with the court. A week ago Darnytsia District Court in Kyiv dismissed the case against the activist of the CF “Patients of Ukraine” Dmytro Sherembey. The court found Dmytro not guilty of charges of the pharmaceutical company.

The ban on ALPHAPEG is valid on the whole territory of Ukraine, all market players and medical institutions have been informed about this ban. From now on the drug is not allowed to participate in the state procurement procedures – thus, the goal of patients’ organizations is accomplished.