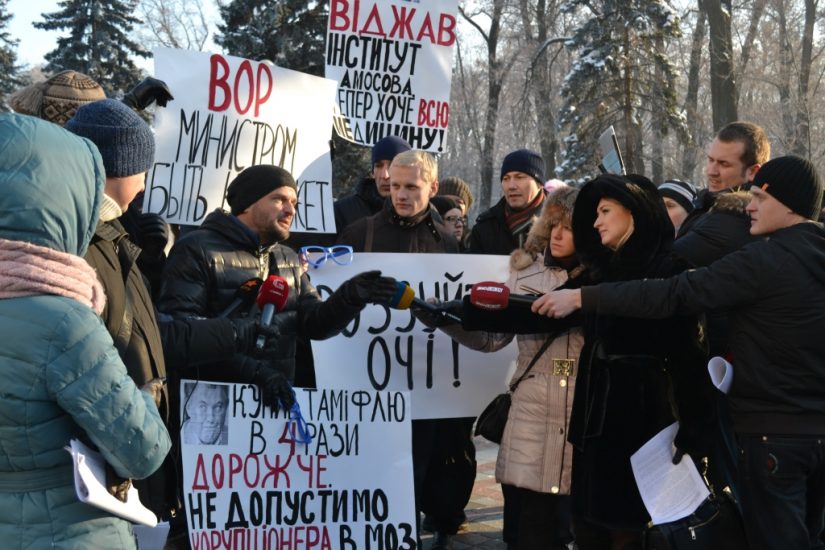 Today, the activists of anticorruption and patients’ organizations picketed the Verkhovna Rada of Ukraine with the only one demand – the Coalition deputies must not vote for the candidate Vasyl Lazoryshynets (the current acting Minister of Health). Again, this candidate for the post of the Health Minister was proposed by Arseniy Yatseniuk.

Activists brought a pair of glasses to each faction that joined the Coalition, so that they could see the evident facts of Mr. Lazoryshynets being involved in corruption scandals.

“The Minister, who openly lies to journalists on camera, cannot count on earning trust of not only politicians but even of a cleaning lady in the MoH, – says Vitalii Shabunin, the Chairman of the “Anticorruption Action Centre”, – Talk about the possible appointment of such Minister discredits all future decisions of the Cabinet of Ministers headed by Arseniy Yatseniuk”.

Recently the mass media released information that Vasyl Lazoryshynets, the acting Minister of the MoH, conceals that his wife is a co-founder of the private “Clinic of new technologies”. This clinic is located on the third floor of the state establishment “National M.M. Amosov Institute of Cardiovascular Surgery of the Academy of Medical Sciences of Ukraine”. Besides, the current head of the Ministry of Health is connected with other clamorous scandals such as the purchase of “Tamiflu” at the time of swine flu at the price 4 times higher than the market price.

Yesterday, on December 1, World AIDS Day, the public activists and patients released information that already this year the MoH has overpaid UAH 26 million on procurement of ARV-drugs for HIV-infected in 2014.

“Allowing such a person to occupy the ministerial chair – a spit in the face to everyone who stood on the Maidan, – says Dmytro Sherembey, the head of the CF “Patients of Ukraine”. – Such officials must be put behind bars and not in the ministerial chairs. Last year Bogatyriova stole UAH 15 million on ART procurement and a criminal case was opened against her, this year the sum increased to UAH 26 million. Let’s see if public prosecution takes an interest in this fact and whether the representatives of already new team are to be held liable for such “overpayments”, – adds Dmytro.