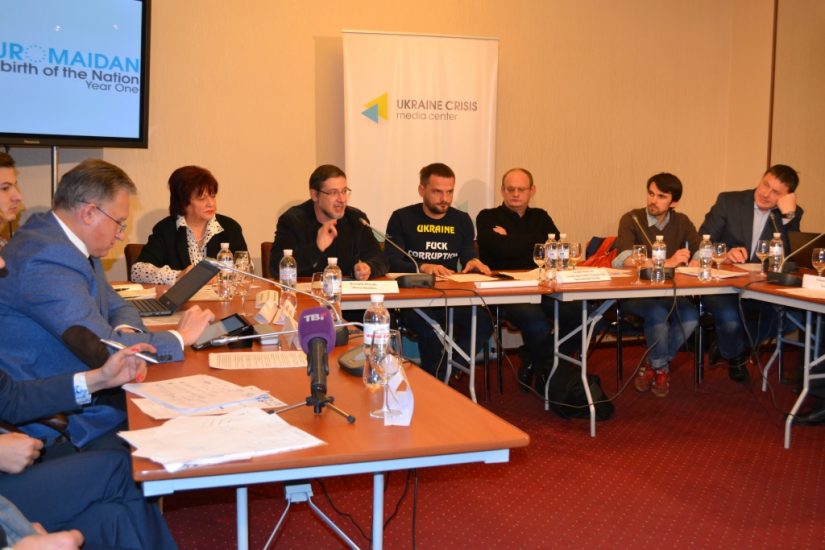 According to the results of public discussion of candidates for the position of the Health Minister of Ukraine, which has been held today with the participation of the leading political forces and public representatives, Olga Bohomolets and Volodymyr Kurpita have been chosen as the best candidates for this position.

A total of 3 key candidates were considered for the position of the Minister of Health: acting Health Minister Lazoryshynets V. V., nominated for this position by the political force “Narodnyi Front (People’s Front)”, Kurpita V. I., the former head of the State Service of Ukraine on HIV/AIDS and Other Socially Dangerous Diseases, self-nominated, and Olga Bohomolets, which was recommended by the initiative “Professional government”.

“The election of the Minister through public discussion of candidates should be mandatory practice in all ministries, and shouldn’t be a backroom deal,” – emphasized during the discussion the leader of the political party “Samopomich” Anna Hopko. “Our political force is ready to support a candidate who is first of all a professional, and not a politician, and who complies with the key requirements of the public, such as the absence of conflict of interest or corruption scandals in the past and who has clear health care reform program”, – added Hopko.

During the public discussion were considered the candidates who have been formally presented to the public commission by political parties, public or through self nomination. Public discussion was broadcasted on “Hromadske TV”, “Espresso TV” and Pershyi Ukraine.

Recall that a week ago activists of patients’ and anticorruption organizations appealed to all political parties which have been elected to the Verkhovna Rada, with an exhortation to disclose the information on their nominees for the post of Minister of Health and hold an open public discussion of these candidates live on television.

On top of that, the activists have announced an open resume collection of candidates who do not represent any political force, but may be worthy candidates for the post of the Minister. Among the activists’ requirements for the future minister, on whom the lives of hundreds of thousands of people will depend, are the following: the absence of conflict of interest and evidence of any evolvement in corrupt schemes; mandatory team availability and readiness to present it; and a clear vision of the mechanisms of health care reform in Ukraine. Also a candidate for the Head of the Ministry of Health must not be a former Minister or his deputy!

During the public hearing, the candidacy of the Acting Minister of Health Vasyl Lazoryshynets has failed on several key criteria. First of all, Mr. Lazoryshynets several times in a row has held one of the highest positions in the Ministry such as the First Deputy Minister of Health and the Head of MoH. He has also been involved in high-profile corruption scandals. “During the time when Mr. Lazoryshynets held the position of First Deputy Minister of Health there was a scandal around the purchase of drugs against swine flu “Tamiflu” at much higher prices – 251 UAH instead of 67 UAH that is costs on the market, – said Andriy Marusov, the Head of “Transparency International Ukraine”. – Moreover, the investigative journalists have emphasized the return of corrupt practices in the Ministry of Health with the appointment of Mr. Lazoryshynets “- he added.

The candidacy of Volodymyr Kurpita, former Head of Ukrainian Center for Disease Control and Coordinator of Strategic Advisory Group for health care system reform in Ukraine, was discussed separately. He personally came to present his health care reform program and answer the questions of the public. His candidacy has passed all the pubic requirements as a person that has not held any official positions, is highly qualified and has never been engaged in a corrupt scandal.

The Experts evaluated the 3 most probable candidates according to the following criteria: