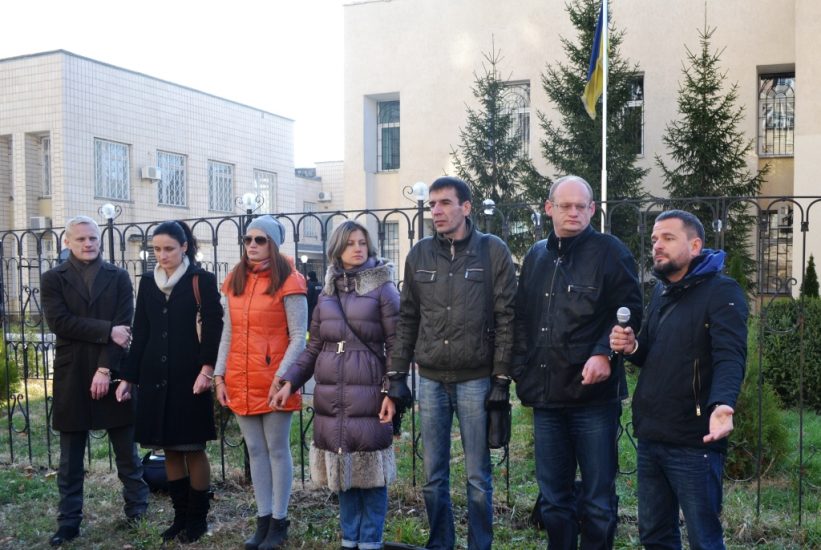 Today up to 100 activists of the public organizations picketed Kyiv Darnytsia District Court as a sign of solidarity with the Chairman of CF “Patients of Ukraine” Dmytro Sherembey. Today the court should have held its first hearing on the criminal case against the activist, but the claimant LLC “Valartin Pharma” did not show up at the court, so the judge postponed the hearing on November 25, 2014.


Handcuffed activists lined up in front of the court building stairs as a symbol that every corruption and freedom of speech campaigner in Ukraine can be prosecuted.

Dmytro Sherembey is accused of allegedly disclosure of trade secret of one of the hepatitis C drugs producer (claimant: LLC “Valartin Pharma”, article 277 of Civil Code “On protection of honor, dignity and business reputation”). The core of the matter is that after learning that the company “Valartin Pharma” wants to sell to the state a drug that has not passed clinical trials, Dmytro has unveiled this information as the one that can cause harm to the thousands of Ukrainian patients.

“We published the official documents that proving the existence of corruption and that this drug might have caused a lot of harm to the patients of this country, – states Dmytro Sherembey, activist, Chairman of CF “Patients of Ukraine”. – We need to shout to the whole world about such violations in the registration of the lifesaving drug that can lead to the deaths of thousands of people instead of keeping silent while the drug is still sold in retail. However, instead of conducting clinical trials the pharmacists began the persecution of activists who disclosed this information. The Public Prosecutor’s Office is silent instead of begin proceedings against the company-producer and the officials who had issued licenses for it! It is nothing else but pressure on my organization and me personally and intimidation of me as an activist for my public work.”

Before the start of the hearing the activists provided the journalists with the documents and official conclusions of the “State expert Center” that prove absence of clinical trials of the drug. They indicate that the producer of drug “Alphapeh” – “Valartin Pharma”,owned by the Cyprus offshore company, stated in its instruction that the drug can be used to treat the most common genotype of hepatitis C in Ukraine – genotype 1 even though no clinical trials have been conducted on this genotype.

Vira Crat, the lawyer of Dmytro Sherembey, also considers this case a prosecution for anticorruption activities and not a legally justified case. “In my opinion there is no objective grounds for filing a lawsuit against my client”, —said the lawyer.

The activists hope for an objective court decision that will clearly show whether or not the persecutions of the activists that fight corruption has begun in Ukraine.

“The purpose of the activities of the activists is the fight against corruption schemes and protection of rights of the citizens. When the activists are being persecuted for their effort to disclose the rights against humanity – it is a very alarming signal about the end of democracy in Ukraine. If the court, as an indicator of the legal field, will be on the side of the claimant, it may indicate signs of collusion and corruption within the court”. – says Vitaliy Shabunin, the Chairman of Anti-corruption Action Center.

More than 100 patient organizations of Ukraine and also leading Ukrainian and international anticorruption and human rights organization such as: “Anti-corruption Action Center”, «Transparency International Ukraine», public association “Reanimation Package of Reforms” and many more have come to the defense of Dmytro Sherembey.
For more information:

Charitable Foundation “Patients of Ukraine” (https://patients.org.ua/en/) — organization which mission is to ensure effective treatment for all patients in Ukraine by bringing together the activists in order to influence state laws and policies.
We want to see the county where the patients have access to all the drugs they need by implementing an effective medicine where the patient activists are treated with respect, have access to the public information, have the skills of strategic work and cooperate with the state that functions transparently, responsibly and openly.
Thus CF “Patients of Ukraine” is recognized by the state agencies, national and international pharmaceutical organizations that are present in Ukraine, clinicians’ communities, patient groups and other players as a legitimate partner.