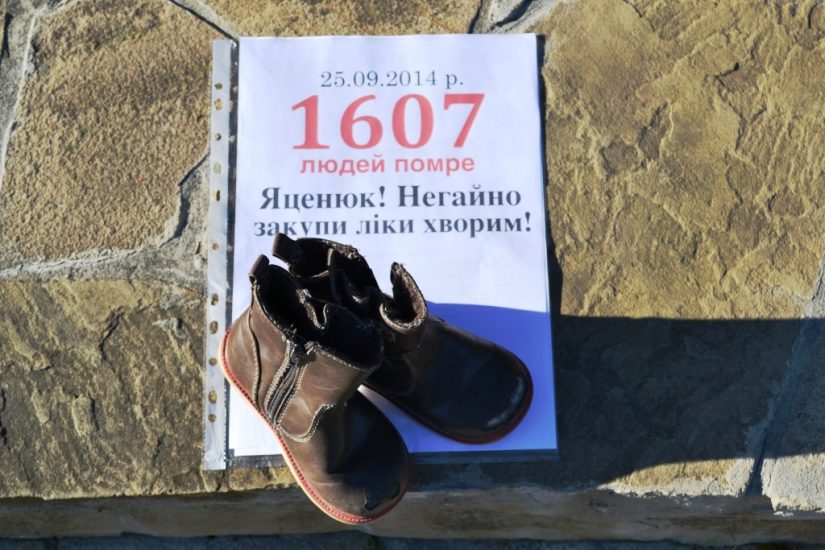 In the early morning representatives of CF “Patients of Ukraine” brought baby shoes and a very sad statistic of deaths among Ukrainians who don’t receive treatment to the Prime Minister’s house. Such symbolical “gift” should remind the Prime Minister that 1607 people die daily while MoH of Ukraine delays the tenders and do not procures medications for patients with cancer, HIV / AIDS, hemophilia, tuberculosis, viral hepatitis, phenylketonuria and other deadly diseases.

“As we promised yesterday, from now on the Prime Minister will find a pair of baby shoes on the porch of his house every day. It will continue until Arseniy Yatsenuyk takes the situation under his control and MoH immediately procures the medications for the patients and give it to them,— says Dmytro Sherembey, the Chairman of the CF “Patients of Ukraine”, — the year of 2014 will go down in history as the absolute failure of the implementation of government programs treat!”

As known, yesterday critically ill patients and their families demanded from the Prime Minister to conduct the tenders and procured the medications immediately. The patients and the parents of sick children had brought hundreds of baby shoes.

“Children with cancer and their parents have a tradition – when the child is taken to the operation the parents leave their shoes near the door of the operating room so that she or he will come back alive and healthy – says Nikodym, the father of the sick child, – If the child doesn’t return these shoes remind everyone about this child and stay in his or her memory in hallway for a long time. Now the Cabinet of Ministers is an operating room, behind its doors the fate of my son and of the thousands of children with cancer is being decided, who fight for their lives every day anyway”.

The situation with the children is not much better. The State has managed to conduct less than a third of the tenders. Some of them have been failed completely.  This means that children with such diseases as oncology, cystic fibrosis, hemophilia, hepatitis, phenylketonuria, respiratory disorders in infants will not receive treatment in the coming year (see the spreadsheet attached). For some of them it means a death sentence.

The patients have brought an appeal to Arseniy Yatsenuyk which was signed by almost 30 public and patient organizations demanding to take a personal control over the resolution of the situation with the public tenders and to hold a special meeting of the Cabinet of Ministers of Ukraine headed by the Prime Minister of Ukraine, which must issue a Resolution on the urgent procurement of drugs and medical devices.

In case of no reaction from the Prime Minister the patients will bring the pair of child shoes directly to the door of the house of Arseniy Yatsenyuk every morning until the life saving medications will not be procured.

CF “Patients of Ukraine” and other partners have repeatedly drawn the attention of the Ministry of Health and the Cabinet of Ministers of Ukraine on the situation with the purchase of medicines in Ukraine and suggested various ways out of the situation than was becoming worse with every month. All the suggestions from the patients have been ignored; the medicines are still not procured.  The letters, publications, actions and demands to dismiss and punish those who are responsible for the failed tenders were IGNORED by the government and the Prime Minister.

The year of 2014 will go down in history as the absolute failure of the implementation of government programs treat!