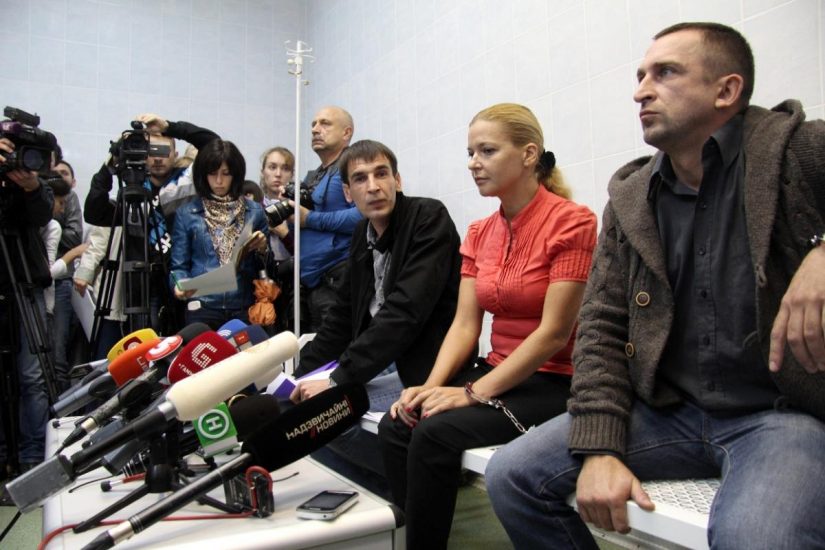 HIV-positive patients of Lavra clinic have lost faith in empty promises of authorities and handcuffed themselves to the cots in the Clinic’s in-patients department. In this manner the activists decided to express position of 9000 clinic’s patients. Representatives of All-Ukrainian Network of People Living with HIV promise to stay on the premises until the clinic is relocated to the promised building on Amosova Street. This statement the activists made today at a press briefing at the Lavra Clinic premises.

Patients presented a copy of the order stating that the in-patient department of the Clinic has to be relocated to the former dermatovenerologic clinic building on Halytska Street. According to the experts conclusions, this building cannot be used as a hospital for HIV-positive patients or for patients diagnosed with hepatitis.

«Our action is a protest against lies that they are trying to feed us with. Before our eyes, they ignore all documented agreements that are fixed in the Memorandum. Those who make these decisions are guided by obscure motives and do not even consider bringing construction of a new hospital on Amosov Street to the completion» — said in his speech Vitaliy Tkachuk, HIV-positive patient of the Clinic.

Recall that on July 11 a trilateral memorandum between the NAMS of Ukraine, Kyiv-Pechersk Lavra and patients was signed which, inter alia, stated that the parties agree «on the integrity of the Hromashevsky Institute of Epidemiology and Infectious Diseases on the territory of the Kiev-Pechersk Lavra until the construction of a new building for the Clinic at 5, Amosova Str. is completed». However, the senior officials of NAMS of Ukraine are now trying to put pressure on doctors and hospital staff, to force the institution to move into the building on Halytska street.

During the press briefing the media representatives were shown video appeal of the Hegumen of the Kiev-Pechersk Lavra, His Eminence Pavel. «All this blackmailing of doctors and patients has to be stopped. I would like to ask Mr. Serdyuk not to do this. There is no need to destroy the agreement. Memorandum is still in effect and we [the Church] are on the side of this document.» — said the Hegumen in his video appeal.

It should be noted that the conflict around the Clinic started back in 2011 when the Academy of Medical Sciences of Ukraine issued a decree to disband the hospital and relocate its parts to various healthcare facilities. Since then, the clinic is in the midst of constant conflict. Only after vigorous protest and pressure from the international community patients managed to defend their right to be treated in the Clinic. Under the terms of the Memorandum, relocation would be carried out only after the «consistent and thorough checks by the Parties of completion of new premises at 5, Amosova Street in Kiev, to ensure compliance with European and national standards and the needs of patients».

«We have handcuffed ourselves to survive! This is our reaction to the iniquities of the President of the Academy of Medical Sciences. We are ready to stay here to the last and keep watch in turns till we, together with doctors, move to the premises at 5, Amosova Street.» — said Anna Konstantinova, patient of the Clinic, a member of the Coordination Council of the All-Ukrainian Network of People Living with HIV.