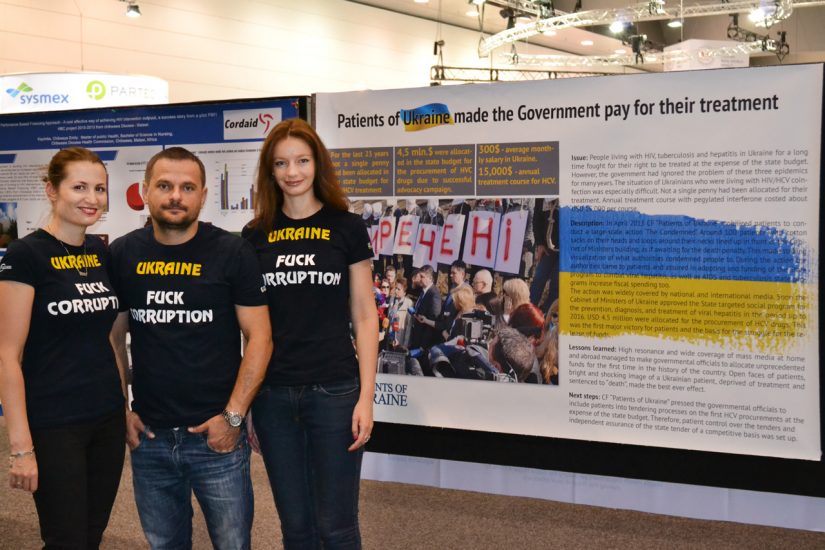 Ukrainian activists from CF «Patients of Ukraine» during the 20th International AIDS Conference in Melbourne made 3 reports and 2 presentation, took part in the protest to ensure access to treatment of hepatitis C.

«Together with other members we held a protest against the giant pharmaceutical manufacturer Gilead, which brings to market a new drug Sofosbuvir to treat hepatitis C at a price of 80,000 EUR per course! This action immediately joined a large number of participants from International HIV/AIDS Conference, transforming it into a viral campaign,» — says Olga Stefanyshyna, Executive Director of CF «Patients of Ukraine.»

The event took place at 20th International AIDS Conference in Melbourne, during the presentation of Gregg Alton, Vice President of the company. Activists harshly condemned and booed speech of Gregg Alton, they symbolically «died» under the scene holding the posters which demanded to prevent such high prices for the drug. Afterwards, activists marched to the Gilead stand and left there a real liver. «This symbol had to remind pharmacists that in the pursuit of profits, they actually kill people with hepatitis C instead to treat them. 3, 5 million Ukrainians can not afford to be treated at such prices, 80,000 EUR — unrealistically high price for patients with hepatitis,» — says Olga Stefanyshyna, Executive Director of CF «Patients of Ukraine.»

It’s nice that some activists were dressed in Ukrainian branded T-shirts with slogan «Ukraine fuck corruption», authored by Chairman of CF «Patients of Ukraine.» The report of Inna Boyko, the member of the team of CF «Patients of Ukraine» was devoted to the fight against corruption in the medical field. Inna shared experiences of NGO’s participation in the formation of transparent tender procedures at the level of the Ministry of Health.

Olga Stefanyshyna presented progress of Ukraine in the access to the treatment of hepatitis C and the need to use generics in the fight against HIV/AIDS epidemic. Dmytro Sherembey, Chairman of CF «Patients of Ukraine», had a presentation «Help Survive!» — when in 2012 Ukrainian government provided treatment for all people with HIV/AIDS for the first time.

Overall the atmosphere at the conference was filled with sadness and mourning, because six participants died tragically in downed Boeing 777, en route to Kuala Lumpur from Amsterdam.

«During the conference speakers started their speech with a moment of silence, they were filled with pain for the dead. It was an atmosphere of tragic union of activists, scientists and physicians from around the world. The value of human life has never been felt so deeply and realistically at the Conference on AIDS,» — says Dmytro Sherembey, Chairman of CF” Patients of Ukraine.