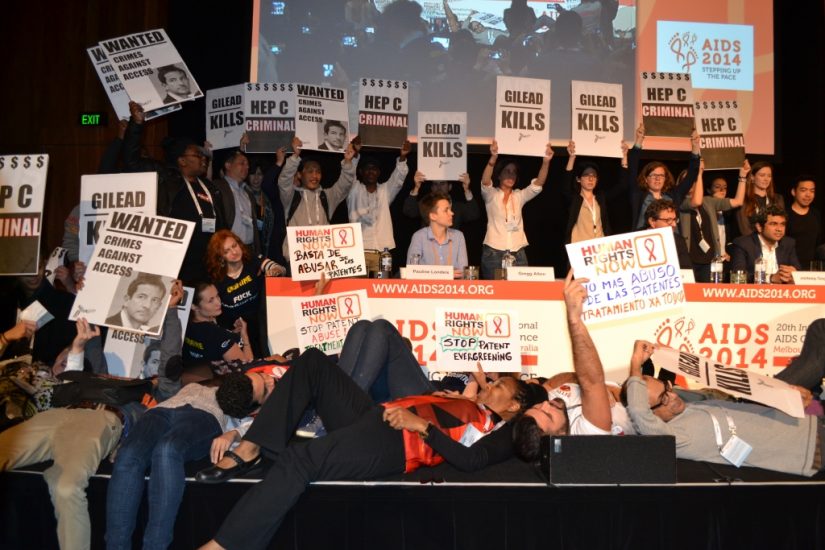 Today at the International Conference on HIV/AIDS in Melbourne activists held a protest in response to the presentation of Sofosbuvir, Gilead’s new hepatitis C virus (HCV) drug. The price of one course’s treatment with this drug will be 80 000 EUR, what is 16 times more than the course of treatment with drugs of other producers in Ukraine.

Although, as clinical studies showed, this drug can cure a patient for a few months, compared with a year or even longer treatment with other drugs, activists harshly condemned and booed speech of Gregg Alton, Gilead’s Executive Vice President, for unbelievably high price. Despite the claims of the head that the cost of the drug will be social and lower for the countries with lower income, he denied this information in the personal conversations. «Yesterday during personal conversation with Mr. Alton he said that Ukraine will not be able to have advantage of this discount and the company plans to sell Sofosbuvir to our country at the same price as, for example, to France, which is 80 000 EUR for the course, that’s why all beautiful claims about social cost are an open lie, — told Olga Stefanyshyna, Executive Director of CF «Patients of Ukraine», which represents the interests of Ukrainian patients at the conference. — None patient infected with hepatitis C in Ukraine can not afford it. This means that 3,5 millions Ukrainians infected with hepatitis C will never be able to get this new drug, «— she added.

Activists were offended by explanation of Gilead’s Executive Vice President that the price is cheaper than a liver transplant. «Extortionate pricing will kill people, no matter what the illness — HIV, hepatitis, or cancer,» — said Edo Agustian, an Indonesian activist co infected with HIV and HCV.

Today 150 million people in the world have a chronic hepatitis. And even though the illness has already been treated in the world, it kills 500,000 people each year. In Ukraine, according to civic activists’ data, about 3.5 millions are infected with hepatitis.

Hepatitis C — is the most common epidemic in Ukraine. The illness is dangerous as everyone can be infected at hospital during manipulations with blood, at dentist and even at nail salon. The treatment is inaccessible for most Ukrainians because of the high cost.