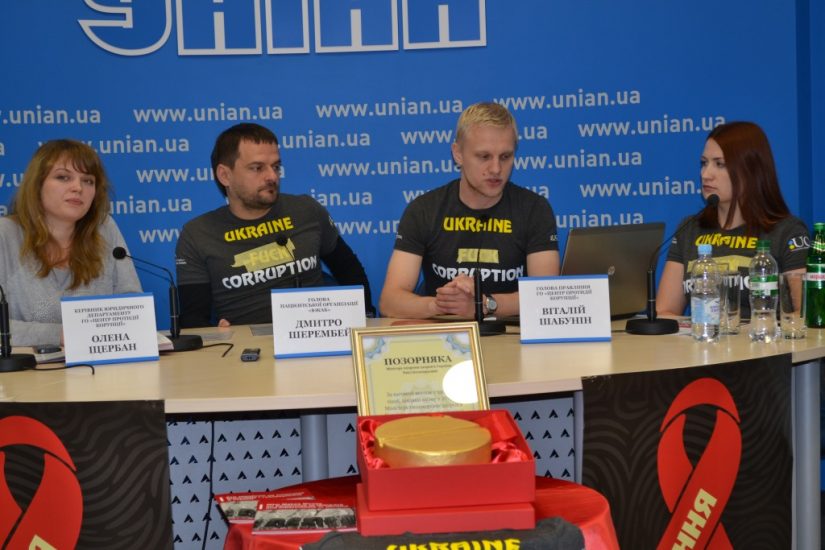 Today Mrs. Raisa Bohatyryova, the Healthcare Minister of Ukraine, received a symbolic reward from patients, as this year her Ministry ‘earned’ less during tenders on the procurement of drugs for PLHIV, compared to the previous year.

During the press conference ‘The award ceremony of the Minister of Health’ patients awarded Mrs. Minister with a medal and ‘Pozornyaka’ (Shamer — anti-diploma), alluding to the fact that the Ministry deserved such a gratitude this year.

‘We brought this medal to Mrs. Bohatyryova to ‘thank’ her, as this year ‘entrepreneurs’ from the Ministry of Health were not so greedy and earned less on PLHIV. However, if the Ministry of Health had held transparent tenders and procured medicines at competitive prices , we could have saved at least 5 000 lives of terminally ill Ukrainians. Now they will pay with their health and lives for new posh cars and yachts of the ministry officials’, — says Dmytro Sherembey, the Head of patients’ organization UCAB.

We’d like to note that each year MOH overpays millions of dollars on corruption schemes during the state procurements of drugs. . NGOs and patients organizations annually compare drug prices, which are procured by the Ministry of Health and non-governmental organizations. Prices for the same drugs sometimes differ by 2-2,5 times. And it is only those drugs that are identical in procurement and which prices can be compared.

Nevertheless, not to lose much income, the officials decided to ‘compensate’ their losses during the procurement of TB drugs. Thus, the difference between the prices, at which these drugs were procured by MOH and NGOs was $1,5 mio.

The analytical report ‘Who makes money on epidemics of HIV/AIDS and tuberculosis in Ukraine’ was presented at the press conference, showing in detail who and how much earns on public procurement of drugs for AIDS and tuberculosis. Namely, the difference between the procurement prices of the MOH and patients’ organizations was stipulated in that report. The list of companies, who annually are winning the state tenders in this sphere were presented as well.

‘Our report shows, that the same false companies, that have been collaborating with the Ministry of Health for a long time, are constantly winning the state procurement. — said Vitaly Shabunin, chairman of the Anticorruption Action Center NGO, — Constant monitoring of such public tenders reduces the corruption margin, i.e. the profit of companies. This is well illustrated by the procurements of antiretroviral and TB drugs” — he adds.

Besides, public activists found that most companies that win tenders, belong to the same persons. In Ukraine about 6 500 companies can apply to the tenders. But only 12 of them actually participate.

‘The same companies are constantly competing with each other on various tenders. At the same time , if you dig deeper, you’ll realize that they all belong to several persons, creating a ‘medical cartel’ that monopolized the market of medical tenders in Ukraine’, — says Vitaly Shabunin, chairman of the Anticorruption Action Center NGO.

Nevertheless, the activists are sure that through price monitoring and control of the state tenders by NGOs, this year less budget costs were stolen.

After the action, patients and public activists handed a symbolic medal and ‘Pozornyaka’ to Mrs. Minister.

[dt_quote type=”blockquote” font_size=”normal” animation=”none” background=”plain”]Additional information:
Now about 120 thousand of PLHIV in Ukraine need ARV treatment. Of these, only 51,5 thousand receive life-saving treatment, as of October, 1. Regarding tuberculosis: Ukraine provides medicines only for 88,3% of patients with tuberculosis. The key to overcoming both epidemics is the availability of timely and quality treatment for HIV-positive patients and patients with tuberculosis. The basis of this treatment is the uninterrupted access of patients to quality essential medicines. In Ukraine, the State is fully responsible for providing patients with drugs, as the Constitution guarantees the right of every citizen to free treatment.
In the state budget for 2013 more than USD 10 billion are allocated to health. 254 and 158 million of them stand for procurement of medicines from AIDS and tuberculosis respectively. While this amount is insufficient to provide treatment for all HIV-positive and TB-patients, the Ministry of Health, instead of using these funds as efficiently as possible, steals part of the costs.
HIV spreadg in Ukraine is one of the highest in Europe and is variously estimated at 0,6-1 % of the population. Concerning the spread of tuberculosis Ukraine is the second largest in Europe after Russia .
Official statistics show that as of the 2012-2013 in Ukraine there are 219 862 people living with HIV and another 61 749 TB patients, which together is equal to the population of the regional centers of the country such as Zhytomyr, Ivano-Frankivsk and Poltava.[/dt_quote]