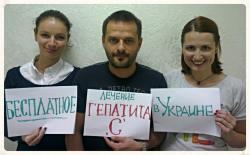 Today, for the first time in the history of Ukraine the Cabinet of Ministers signed the State Program on combating Hepatitis in Ukraine and the relevant allocation of funds. According to this document the Government will allocate approximately Euro 3 mln this year for treatment of people with Hepatitis in Ukraine. Most of these funds will be used for the purchase of medicines for people with urgent medical needs.

«The patients have won. This is a precedent for Ukraine,» — says Dmytro Sherembey, the head of the patient organization UCAB. — «After all, previously the very fact of the hepatitis epidemic in Ukraine was itself hidden. For its entire history not a single penny has been allocated for the treatment of people who had been dying from the disease. Now we will do our best to ensure the transparent use of funds and access to treatment for those for whom it is vitally important,» — adds Dmytro.

As the Vice-prime-minister of Ukraine Konstantin Gryshenko stated in his Twitter account: «For the first time the costs will be allocated for the appropriate measures (The State program on combating Hepatitis (author’s note). Glad that the document we promoted and worked over so hard is signed. Separate thanks to the NGOs for support of our efforts and persistence. It’s a great result and the experience of cooperation between authorities and society», — added the Vice-prime-minister in his Twitter account.

It should be noted that now the State Expert Center of Ukraine on behalf of the Ministry of Health is developing medical standards for the treatment of Hepatitis C — the documents by which the doctors will have to treat patients. The procedures and treatment regimens depend on these documents, and thus their approval as soon as possible is critical.

«We encourage Ukrainians, who urgently need treatment and were deprived of treatment because of the absence of the medicines in clinics — to approach their doctors, requesting medicines, funds for which had been allocated by the State», — adds Olga Stefanyshina, the Executive Director of the patients organization UCAB.

As is well known, on December 28, 2012 President of Ukraine Viktor Yanukovich issued an Order to the Cabinet of Ministers and personally instructed Prime Minister of Ukraine Mykola Azarov to provide additional funds for the treatment of terminally ill Ukrainians. Patient and public organizations, for their part, have tried in any way during the last year to attract the attention of the President, the People’s Deputies, the Government and the public to this need, because until the middle of April there was no mention of financing for patients in previous documents of the Cabinet. Let us remember that just after the patient action «Condemned», which took place near the walls of the Cabinet in April, the Prime Minister Mykola Azarov issued an Order to Yuri Kolobov and Raisa Bohatyryeva during the preparation of amendments to the Law of Ukraine «On the State Budget of Ukraine for 2013.» The instruction was to provide for the costs necessary for the purchase of medicines and medical devices for the treatment of HIV/AIDS and tuberculosis, and to submit for the consideration of the government a state program for the treatment and diagnosis of viral hepatitis in the period up to 2016.

It should be noted that today the average course of treatment for hepatitis C in Ukraine costs almost Euro 10 000, making treatment almost inaccessible for Ukrainians. As a result of the adoption of the state program and bulk purchases of drugs, it is possible to achieve lower prices and a greater availability of drugs for those patients who need them. For example, thanks to governmental agreements with pharmaceutical companies, the treatment of hepatitis C in Egypt costs up to 2,000 U.S. dollars, that is, ten times cheaper than in Ukraine.

«Ten years ago we, the activists, were able to initiate the large-scale introduction of ARV treatment. During this time, thanks to the efforts of activists, the number of people receiving treatment increased by 160 times. Today, when the government begins to execute the State program to combat hepatitis, we are ready to make every effort to advocate for increased government funding for the program to save the lives of Ukrainians, to ensure the future of our country,» — noted Vladimir Zhovtyak, the Head of the Coordination Council of the All-Ukrainian network of PLWH.

[dt_quote type=”blockquote” font_size=”normal” animation=”none” background=”plain”]Additional Information:
Hepatitis C is the most common epidemic in Ukraine. Approximately 3.5 million Ukrainians are affected by viral hepatitis. The disease is dangerous because one can get infected in the hospital when handling blood, at the dentist and even at a nail salon. Treatment is inaccessible for most Ukrainians because of the high cost. One course of treatment is around 15 thousand dollars per year. Medications for hepatitis C for adults have never been purchased with public funds.[/dt_quote]