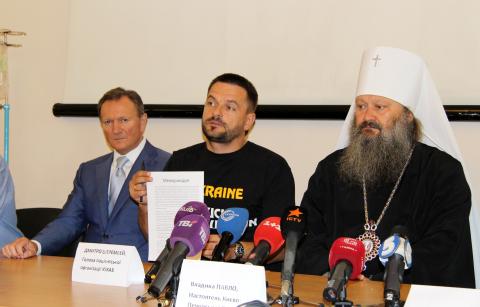 Today, a memorandum was signed between the Church, the state and patients regarding the inviolability of the L.V. Gromashevskii Institute of Epidemiology and Infectious Diseases in the Kiev-Pecherska Lavra until the new premises for the clinic are completed.

This document is the result of a patient protest against the Decree of the Cabinet of Ministers of Ukraine from July 1, which ordered over the course of a week, that is, until July 8, to evict the clinic and its patients from the premises in which they are now receiving life-saving treatment.

«We were prepared to chain ourselves to the beds, only not to allow them to remove equipment from the clinic, — says Dmytro Sherembey, head of the patient organization UCAB and a patient of the clinic. — After all, the only place that can accept patients is the new clinic that is being built on Amosova St. In no other place was it possible to install equipment or service the number of patients, including intensive care units, that are currently in the hospital. Therefore, we hope that this memorandum between the Church, the state and the patients will put an end to any future infringement of the clinic.»

Today, the Gromashevskii Clinic of Infectious Diseases treats more than 9,000 patients from all of Ukraine because its equipment, much of which was purchased at the expense of foreign donors and foundations, is unique. It saves the lives of thousands of terminally ill Ukrainians annually. In the past, concerts have been organized in Kiev to raise money for equipment at the clinic, including performances by Elton John and the majority of Ukrainian stars.

The conflict around the clinic arose in 2011, when the Academy of Sciences of Ukraine adopted a resolution to remove the hospital and relocate its parts to various medical institutions. Since then, the clinic has been in the midst of constant conflicts. Only through loud protests and international pressure have patients managed to assert their right to treatment in the clinic.

Clergymen also agreed to wait until the new building, where the clinic should be relocated, is completed. «The Church has never cast anyone out,» — stated Archbishop Pavel, rector of the Kiev-Pechersk Lavra, at a press conference, sitting next to a patient in a hospital bed to testify to his support. «So now we are ready to support patients in our prayers as well as by officially declaring our willingness to wait for the transfer of the hospital building to the church, » – said the Archbishop.

Everything on the memorandum was endorsed by four parties: Archbishop Pavel, on behalf of the Church, Valery Zaporozhan, acting President of the Academy of Medical Sciences of Ukraine — representative of the interests of state authorities, Dmytro Sherembey, head of patient organization UCAB, which protects the rights of patients in Ukraine, and Volodymyr Zhovtyak, the head of The All-Ukrainian Network of People Living with HIV / AIDS — the largest organization in Ukraine that unites people living with HIV.

«The most important thing is that all three parties involved finally announced a consolidated position — patients and staff will stay at the Lavra until they accept the state of readiness of the new premises at Amosovа street themselves and begin the procedure of moving house. This is a big victory for the community of people living with HIV in Ukraine and for more than 9,000 patients of the clinic, which now have a documented proof that treatment will not be interrupted and that they will be able to live,» said the Chairman of the Coordination Council of the All-Ukrainian Network of PLWH Vladimir Zhovtyak.

Under the terms of the memorandum, patients, doctors and all the unique equipment that is in the clinic will be transported to a new location at the address: 5 Amosova St. Patients coming to the hospital from other regions are already being warned of the impending move and being reassured that the new clinic on Amosova street will not give way to the existing clinic and will be able to serve even more patients at the same time.