Oncological Tricks at the Ministry of Health

Oncological Tricks at the Ministry of Health 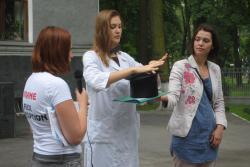 Cancer patients asked doctors and officials not to steal their medications. Next to the Ministry of Health building a magician in a doctor’s white coat demonstrated the «tricks» that happen every day with medications at the oncology hospitals. Patients demanded absolute transparency from the ministry in the distribution and use of medications procured at the expense of the state budget. Despite annual increases in expenditures for chemotherapy drugs, the majority of patients have never seen them.

«When my mom was diagnosed with cancer, the doctor gave me a long list of drugs and medications. It even included cotton and sterile liquid, which means they don’t have anything,» recalls Aleksey, whose mother died two years ago in the Kiev Oncology Center on Verkhovynna Street. «Of course, I immediately bought everything. Over the course of my mother’s illness I spent more than UAH 20 000 on chemotherapy drugs. When my mother died I began to inquire into the details of her treatment. Imagine my shock when I received an official letter that indicated that my mother had received medications at the expense of the state for a sum of almost UAH 8000. But I have checks confirming that I bought these drugs myself!! My mother did not receive a single pill from the state budget, although she worked honestly in medicine for forty years. I am convinced that these medications were simply resold and ‘written off’ for my mom.»

In the course of UCAB’s research, it became clear that people are afraid to speak publicly about problems in cancer hospitals out of a fear that they will be treated worse or released home to die. All of those who agreed to speak with patient organizations confessed that they do not receive any medications. Doctors name sky-high prices for drugs and hand out the business cards of pharmacy chain representatives or some mysterious couriers who bring medications to patients at home without checks or invoices.

«I go through chemotherapy at the oncology center on Verkhovynna Street. One course costs about UAH 12 000. But I learned that the oncology center is sufficiently supplied with the drug that I was buying with my own money. Not once in several years of treatment have I received it from them, although I am from Kiev,» says Dmitriy, 42, a cancer patient. «So what happens to the medications that the state buys and distributes to a medical facility? I spoke with other patients, and everyone buys medicine at their own expense.»

There are UAH 230 million in the 2013 budget for medications to treat adult cancer patients. 216 million are allocated for children. Just one oncology center on Verkhovynna receives medications for UAH 60 million annually. Obviously, it is a huge temptation for dishonest doctors that can always write off the medications as used or damaged, and instead resell them to the same patient.

«Medications for my father cost more than 30 000 dollars for a course. I don’t know where we will find the money,» says Olga in despair, the daughter of a cancer patient. «If only a part of the drugs were provided in the hospital…but we don’t receive any help. We will probably have to sell our apartment to save Dad.»

«We demand from Mrs. Bogatyreva to issue a special order for the major oncology center physicians: to post a bulletin with a list of all drugs purchased at the information board in the hospital monthly. Then patients will be able to see which medications they can receive from the state budget,» states Olga Stefanyshina, executive director of the patient organization UCAB. «If doctors continue to force patients to buy medications that have already been given to the hospital, we will initiate inspection by the authorities.»

A booklet that included the stories of cancer patients was also presented during the event. It’s publication was supported by the International Renaissance Foundation. A copy of the booklet was handed personally to Ms. Bogatyryova together with the letter.

[dt_quote type=”blockquote” font_size=”normal” animation=”none” background=”plain”]Information:
Cancer is the second leading cause of death of Ukrainians after cardiovascular diseases. Every day 239 people die from cancer, or ten hourly.
Now more than 1 million Ukrainians are on the cancer registry. Approximately UAH 450 are allocated per year for the treatment of one patient. Тhe cost of chemotherapy treatment can reach up to UAH 50-100 thousand or even more.
Every third Ukrainian oncology patient dies within a year of diagnosis. In Ukraine, the 5-year survival rate does not exceed 41%, while in France it is 60%, and 64% in the U.S.
In Ukraine, one in four children with cancer dies within the first year after diagnosis.
Up to 60% of all cancer patients do not receive special treatment, which explains a high mortality rate in Ukraine.[/dt_quote]