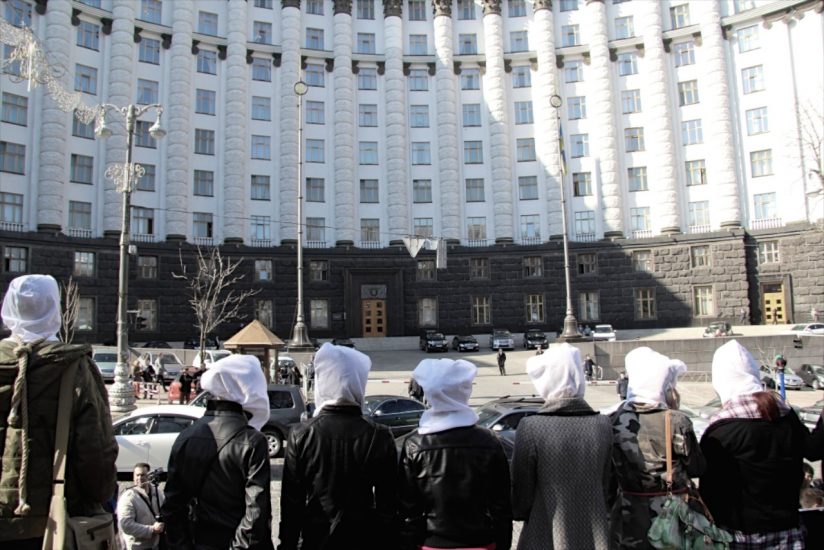 People living with HIV / AIDS, tuberculosis and hepatitis for a long time fought for their right to be treated at public expense. However, the government had ignored the problem of these three epidemics for many years.


The situation of Ukrainians who were living with hepatitis C was especially difficult. Not a single penny had been allocated fron the state budget for the treatment of patients living with hepatitis C. Annual treatment with pegylated interferons costed about UAH 100 000. Of course, this money is unaffordable for the majority of our fellow citizens — consequently, the epidemic of hepatitis was becoming more and more rampant. Due to the numerous protests of patients, organized by UCAB, at the end of 2012 the President of Ukraine issued an Order of the Prime Minister Azarov to finance the fight against the three epidemics. However, officials have ignored the Order.

In April 2013 UCAB, together with partners (Ukrainian and international public and patient organizations) conducted a large-scale action ‘The Condemned’. Around 100 patients with cotton sacks on their heads and loops around their necks lined up in front of the Cabinet building , as if awaiting for the death penalty. Thus, officials could see to what they condemn patients that needed treatment. During the action the authorities came to patients and assured that in the nearest future the State program to combat viral hepatitis will be adopted and funded. Also under pressure from patients, officials promised that this year the funding to fight the epidemics of HIV / AIDS and tuberculosis will be increased fiscal spending to.

‘We are really shocked by such a quick response of the authorities to the patients’ action, and are ready to continue the dialogue — said Dmitry Sherembey, the Head of UCAB, after the action, — We will monitor all steps taken by officials according to the Order. Also we will do everything to reduce drug prices, especially for hepatitis. Our preliminary negotiations with pharmaceutical companies have proven that this is possible. But this requires the procurements of drugs by the state’.

On April 29, 2013 the Cabinet of Ministers of Ukraine approved the State targeted social program for the prevention, diagnosis, and treatment of viral hepatitis in the period up to 2016. This was the first major victory for patients and the basis for the struggle for the release of funds.

During a few months UCAB reminded the officials about the need to allocate funds for the procurements of drugs for hepatitis. We sent numerous letters to representatives of the Cabinet of Ministers with a request to take personal control of the financing of the first in the history of Ukraine procurement of drugs for hepatitis. In addition, UCAB held negotiations with producers of peginterferons to provide lower prices for government procurements.

In September 2013, the Cabinet allocated UAH 33,2 million for the procurement of drugs for hepatitis. Vice Prime Minister of Ukraine Konstantin Grishchenko noted on his Twitter: ‘For the first time funds for these activities will be allocated. I am glad that the document on which we have worked so much and which we promoted for is now signed. Special thanks to NGOs for their support of our efforts and perseverance, — said Mr. Grishchenko, — This is a good result and experience of cooperation of community and state authorities.’