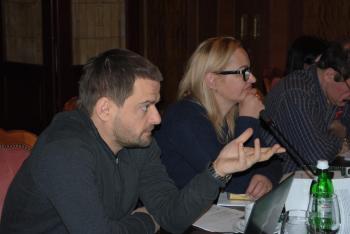 During a roundtable discussion «Access to treatment for hepatitis C in Ukraine» held today patient groups have made a commitment to achieve lower prices for drugs used to treat hepatitis C.

«We will reduce the cost of annual treatment course for hepatitis C from USD 20,000 to USD 2,000», said Dmitry Sherembey, Head of Ukrainian Community Advisory Board. «Every day we are approached by patients who are unable to find the money to pay for their treatment, even if they try to sell their apartments, leaving their families in the street. We therefore commit ourselves to achieve lower prices for the drugs, believing that if this could be achieved in a country like Egypt, then we can do the same in Ukraine».

At the roundtable attended by NGOs, Ministry of Health officials, Members of Parliament, pharmaceutical companies and international experts from Egypt and France, the patients put forth a proposition to reduce the cost of hepatitis C treatment in Ukraine by letting biosimilar products be present in the domestic market, just like it had been done in Egypt.

It should be noted that the government of Egypt, where 13 million people are infected with the disease, has managed to control the country’s hepatitis C epidemic. Having reached an agreement with a local pharmaceutical company on domestic manufacturing of the medicine, the Egyptian government managed to reduce the treatment cost from USD 20,000 to USD 2,ooo, which enabled it to procure many more treatment courses. Such cooperation between the government and pharmaceutical companies allowed enrolling a huge number of patients on the treatment program and thus containing the spread of the epidemic.

We would like to remind you that the Government of Ukraine, where according to the World Health Organization almost 3.5 million people are currently living with hepatitis, has allocated UAH 0.000 to treat the patients in 2013.

«We hope that this year for the first time in Ukraine’s history the state budget will allocate funds for the treatment of Ukrainians [living with viral hepatitis]. We are actively working to lower the cost of the drugs by localizing their manufacturing. Once it becomes clear, what budget appropriations have been approved and how many treatment courses we need to procure, we can start discussing some manyfold price reductions», said Dmitry Pidturkin, Advisor to Minister of Health of Ukraine.

It’s noteworthy that thanks to some advocacy efforts by patient and community groups, on December 28, 2012 the President of Ukraine signed the Order «On certain matters related to preventing the spread of TB, HIV/AIDS and viral hepatitis epidemics» (#1-1/3526), instructing the Cabinet of Ministers of Ukraine to make amendments to the 2013 State Budget Law and allocate funds needed to treat hepatitis C patients. During the preceding nationwide advocacy campaign «Altruist MP», NGOs demanded allocation of USD 304 million of state budget funds to treat people infected with hepatitis C for whom treatment is urgently indicated.