Today, HIV-positive child was ignored in the Ukrainian Parliament

Today, HIV-positive child was ignored in the Ukrainian Parliament 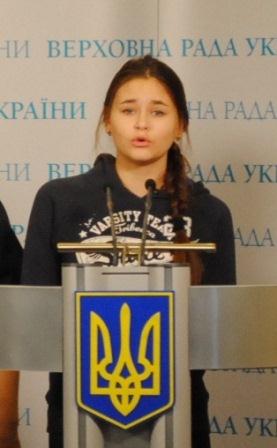 State Budget of Ukraine for 2013, voted on today by the Verkhovna Rada of Ukraine, became fatal sentence for 110,000 Ukrainians living with HIV, tuberculosis and hepatitis — it was reported today by the representatives of UCAB patient organization that fights for the treatment for people living with terminal diseases in Ukraine.

Even sick kids, who came to beg MPs not to vote for the devastating budget, could not stop them. 242 deputies voted for the document that would kill 110,000 of their compatriots.

«I lost my mother when I was 6 years old. Then I found out that I had HIV. It was hard. I had no one to whom to talk with. I really do not want other kids feel like this when their parents die because of the lack of treatment.» — Told an HIV-positive Lisa, 13 years old. She came to the Parliament to ask the deputies not to vote for this budget.

Today, patients with AIDS, hepatitis and tuberculosis came to the Parliament to demand on the will of the President of Ukraine, ignored by the Government, and to amend the 2013 budget money for the treatment of terminally-sick Ukrainians. After the recent action «UKRAINE under QURANTINE!,» the President insisted on full funding of treatment for people living with HIV, TB and hepatitis. This position was posted on the official website of the President of Ukraine: http://www.ucab.org.ua/en/node/172

Unfortunately, the Government ignored Presidential appeal, giving 0 UAH budgeted in 2013 for the treatment of hepatitis, and only 40% for AIDS and tuberculosis, which will cause to the death of 110,000 Ukrainians next year.

«This is our last desperate step to bring the kids to the Parliament, — says Dmitry Sherembey, chairman of Patient Organization UCAB. — But the deputies voted for the budget which is the disaster for Ukraine, attacked by the three epidemics. We are confident that the President will veto this law because it contradicts his position. This is our last hope. »

Let us remind of the community campaign «Altruistic Deputies» that was launched in June, in the framework of which key patient and community organizations hold an all-national advocacy campaign to make Ukrainian government allocate 1 billion of Hryvnias for the treatment of Ukrainians with Hepatitis, TB and AIDS in 2013, in particular: