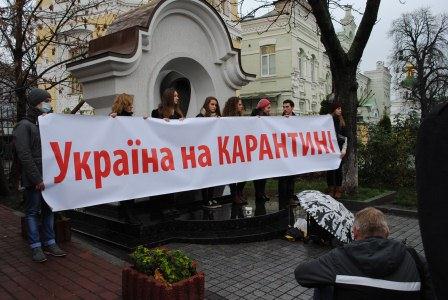 «Ukraine under QUARANTINE!» — this is the letter received today by the Ambassadors of foreign countries to Ukraine. This is how community and patient organizations have warned the global community about three epidemics raging in Ukraine: hepatitis, TB and AIDS. This is how Ukrainians with life-threatening diseases tried to draw attention of high officials toward complete disregard of the problem of epidemics in their country.

According to statistics, today every 10th Ukrainian is infected with hepatitis, TB or AIDS. That is why under the current policy of the government in the nearest future Ukraine will became a life-threatening country not only to live in, but to visit as well. Thus, for example, the draft of the state budget for 2013 envisages 0 Hryvnias 0 kopeks for treatment of people with hepatitis. That does not only mean death sentence for millions of Ukrainians but a sizable push towards further rolling out of the epidemic, as the global practice demonstrated that the epidemic can be stopped only by efficient treatment of those people who are already infected.

«Exactly two months ago we appealed to the President of Ukraine Victor Yanukovich with a request to mandate the Cabinet of Ministers to envisage 1 billion of Hryvnias in the next year budget for the treatment of people with these three infections — states Dmitro Sherembey, Head of UCAB patient organization. — We were not heard, that is why there is only one way out for Ukraine today — close the state border for quarantine. As long as state officials keep silent about the real scope of these epidemics, we decided to warn everyone about the threat waiting for them in Ukraine.»

In order to draw attention, patients and leaders wearing masks came to the Administration of the President of Ukraine to pass on the letter with the appeal to not to let the disaster happen in Ukraine and save millions of lives through allocation of 1 billion of Hryvnias for treatment of these diseases, or officially admitting an epidemic in Ukraine.

«A couple of days ago the government has approved funding for Feofania hospital serving high officials in the amount of half a billion Hryvnias, — says Oleg Martyniuk, a patient with hepatitis. — And that was done in the times when every 13th Ukrainian is infected with hepatitis, and the state allocates 0 Hryvnias for their treatment pleading absence of money. These patients are doomed, but government officials continue to make their own hospital flourish.»

At this time, in the draft of state budget of Ukraine for 2013 according to State special-purpose programs, the need of HIV/AIDS treatment is covered at 45%, TB — less than 40% and no funds for Hepatitis treatment for adults is planned, at the same time according to the MOH the current need is 2 605 billion UAH.

Let us remind of the community campaign «Deputy-Altruist» that was launched in June, in the framework of which key patient and community organizations hold an all-national advocacy campaign to make Ukrainian government allocate 1 billion of Hryvnias for the treatment of Ukrainians with Hepatitis, TB and AIDS in 2013, in particular: