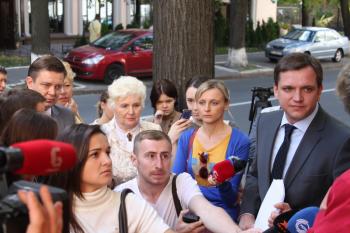 Today people, infected with tuberculosis, HIV and hepatitis, addressed to the President of Ukraine Viktor F. Yanukovych asking to save their lives by issuing a special order to allocate UAH 1 billion in the 2013 budget for their treatment. This appeal was signed by 117 NGOs.

«We hoped that peoples’ deputies would listen to the tenth part of their electorate, current number of infected, at least before the elections.» — says Dmytro Sherembey, HIV-positive person, Ukrainian Community Advisory Board Chair. — «But, unfortunately, only 32 members of Parliament agreed to refuse from their privileges in favor of ordinary ukrainians. Over the last 1.5 years I have lost 10 people whom I was acquainted with and whom the hepatitis ate alive, same is happening in Ukraine, where political indifference is eating the country even now, during the election race».

UAH 1 billion is only one-third of the sum which is annually allocated for a sanatorium-and-spa treatment and health improvement for the officials. Recently the State has appropriated UAH 1 billion for installation of CCTV cameras at polling stations. UAH 1 billion is a sum of money called to save lives of more than 100 thousand terminally-ill Ukrainians in 2013.

«Today we showed the real face of each MP,» — Olena Kucheruk, infected with Hepatitis C, addressed the people present. — «We brought 450 medical masks. Each of them has a written name either of an „altruist“ MP, who is ready to give up a part of his deputy privileges, or of an I-don’t-care-ist MP, who promises improvement only from TV screens and billboards».

The activists have collected more than 6 thousand signatures of Ukrainians, infected with Hepatitis C, to hand them over to Viktor Yanukovych together with an open letter, since there was no state funding for Hepatitis C treatment over all the years of independence, leaving sick people to die.

We want to remind you that the public campaign called «Deputy-altruist» was launched in June. Key Ukrainian NGOs dealing with people living with HIV, hepatitis and tuberculosis, made a personal appeal to each people’s deputy of Ukraine refuse from a part of their deputy privileges and transfer these funds to ill people. There is an online tracking of the MPs’ reaction for the patients’ requests at the website. The deputies who give a written positive answer are immediately moved from the «I-don’t-care-ist» column to the «altruist» column. Massive billboards with photos of patients wearing masks have hit all main squares of Ukrainian capital.

At today’s press-conference patients announced the name list of the I-don’t-care-ist MPs who have ignored their voters’ will.

After the press conference, activists brought the letter to the Presidential Administration, where Yuri Pavlenko have met them. «The President always took care of the problems of Ukrainian patients — said Mr. Pavlenko. — Position of the President of Ukraine on the need for full funding for HIV / AIDS and provide 100% of the needs of patients with tuberculosis and hepatitis is the same. Your application will be quickly processed and passed to the President of Ukraine, considering started the budget process and the need for quick response. I’d like to remind that currently a Presidential Order concerning the provision of medicines of all HIV-positive Ukrainians is operating. He finds it necessary to adopt special programs for the treatment of tuberculosis and hepatitis, measures to prevent these diseases, understanding the urgent nature of these issues.»