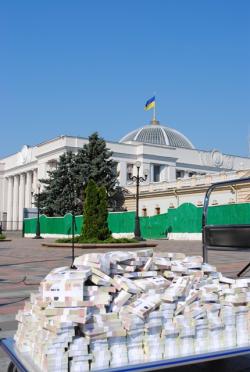 Today, in the framework of ‘Deputy-altruist’ campaign, the activists gathered nearby the Verkhovna Rada have proposed to give away 1 billion hryvnias, or the third part of the sum annually assigned for sanatorium-and-spa treatment of state officials, to fatally diseased Ukrainians. A person worn business suit of an official tried to protect the billions of artificial hryvnias from fatally diseased patients by trundling them on a handcart in front of the Rada.

«Stop hurling around empty promises about refusing from your deputy privileges», asserts Dmytro Sherembey, an HIV positive, the Head of the Ukrainian Community Advisory Board. «Today we have passed to deputies letters from our patients saying to publicly refuse from one third of medical expenses assigned for them and officially affix their signatures under such refusal. Then the Ministry of Finance will have chance to assign this money in next year budget for treatment of hepatitis, tuberculosis and AIDS and therefore stop these epidemics in Ukraine. Such altruistic act can reveal to the best way those of people’s elected representatives who cares about the destiny of people in need for the help and make a choice between the sanatorium vacation for officials and life of thousands of diseased Ukrainians».

Based on the State Budget 2012, UAH 2.6 billions have been assigned for treatment and sanatorium-and-spa recreation of departments of the Verkhovna Rada, the Cabinet, the President’s Administration, the Ministry of Internal Affairs, and the Ministry of Defense.
Approximately the same sum of money is received by the Ministry of Healthcare for the rest of other Ukrainians all over the general state medical establishments (hospitals, polyclinics, medical centers, and first-aid stations) — UAH 2.8 billions.

These are the people’s deputies who are authorized to cut costs for medical services and sanatorium-and-spa treatment of the state machinery in our country.

The walls of Verkhovna Rada have also been combated by the patients’ relatives and people who lost their natives due to lack of finance of medical establishments. «My son Oleksandr was 38 years old when he was diagnosed pneumonia. It’s probably been a cold caught at work», told us a mother of the deceased Oleksandr. It turned out further that he had tuberculosis. And that was it. It was his death sentence. He was sent to Mostysche, which is called a deadly place. Now I understand why. I sold one room in my apartment in order to save my poor son who was assigned by the government only UAH 3.5 per day. Doctor visited him once a week… But I failed to. I did not make in time. I was run out of funds. And now my son is no longer here. However, I have come here today to help other mothers, wives, children save their moms, husbands only because the government does not care, since officials neither see, nor hear this out of their palaces».

«How many electors have you killed?», I put this question to every people’s deputy. «There are UAH 2.6 billion on the scales, which are spent today from the state budget for VIP medical services for the rulers and the life of over 4 million Ukrainians diseased with AIDS, tuberculosis and hepatitis who are still waiting for financing. Even a partial refusal from the privileges can save the life of fatally diseased Ukrainians, you decide!», Director of International HIV/AIDS Alliance in Ukraine Andriy Klepikov appeals to people’s deputies.

«Not a penny has ever been spent from the budget over the entire history of Ukraine for treatment of hepatitis that have affected today 3.5 million Ukrainians. People who should have been provided free medical services by the government under the Constitution were left to die. I hope that owing to this campaign we will manage to open the eyes of state officials to the issue of financing in Ukraine and first of all for the treatment of such patients», states the Head of the All-Ukrainian Association «Stop Hepatitis» Olga Gavrilova.

The activists handed over books for collection the signatures to the heads of parliamentary factions. Signatures of the deputies will certify their readiness to vote for the State Budget 2013, which would contain a billion of hryvnias for overcoming three epidemics.

«It may be said without exaggeration that epidemics of HIV/AIDS, tuberculosis and viral hepatitis is a kind of a test for our society. This is a test for the government in terms of its ability to get mobilized together with public and international organizations for the suspension of epidemics. This is a very sensitive indicator, which builds up the country image. That is why taking these three epidemics under control at the modern stage of development of Ukraine is extremely important for the future of our nation», says Volodymyr Zhovtyak, the Head of the Coordination Council of the All-Ukrainian Charity Organization «All-Ukrainian Network of People Living with HIV».

«UAH 1 billion for the liquidation of danger of three epidemics is not an issue for the state budget. Even if one makes a rough calculation of 2.8 billion distributed among the cluster of officials, for whom they are assigned, and the budget of the Ministry of Healthcare of 2.6 billion distributed among all diseased Ukrainians, the difference would be tremendous! It worth only cutting one third of the funds spent for medical servicing of the state machinery, which is not even perceived by the rulers, and the a life-saving billion would appear in the budget to stop the three epidemics, which may distress the nation», asserts Andriy Novak, the Head of the Economists’ Committee of Ukraine, Ph.D in economics.

[dt_quote type=”blockquote” font_size=”normal” animation=”none” background=”plain”]Today in Ukraine:
9.5% of population is infected with HIV, tuberculosis and viral hepatitis. These are 4 million 184 thousand Ukrainians.
234,832 Ukrainians are HIV positive. Everyday HIV infection affects 58 Ukrainians.
449,201 Ukrainians are infected and have active tuberculosis. 12,000 annually die from this disease. Everyday tuberculosis affects 102 people in Ukraine.
3,500,000 Ukrainians are infected with hepatitis.
Over the 20 years Ukraine has already lost 369,780 thousand citizens because of these epidemics.
If families and relatives of diseased people are taken into consideration, the figure of those affected by epidemics will reach approximately 12,150,000 comprising 36% of the population of Ukraine.[/dt_quote]