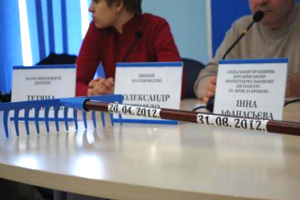 Patients with life-threatening diseases brought their appeal and a rake to the Ministry of Health Ukraine. By this act they demanded that the state drug procurement tenders be announced timely. Patients are resentful that the new Ministry leaders might trigger a backflash just like their predecessors who delayed tenders for drug procurements, and ultimately the ones who’d suffer would be patients…

The rake has two dates inscribed on it: April 20 — deadline for tender announcement, and August 31 — the day when all drugs have to reach health care facilities. These dates are also indicated in the appeal that was passed to Raisa Bohatyriova, Minister of Health Ukraine, along with the rake in order to prevent the disaster able of taking thousands of lives and making tens of thousands Ukrainians handicapped. «This is the first time that we, patients with HIV/AIDS, TB, cancer and hemophilia got together so that the Ministry of Health could hear us and timely purchase the drugs that our lives depend on», says Dmitro Sherembey, HIV-positive, Head of Ukrainian Community Advisory Board advocating for treatment. «Previous mistakes shouldn’t be repeated not to cause a backflash killing Ukrainians».

Today, 1.5 million of Ukrainians live with life-threatening diseases; over 10 thousands of them are children. They are primarily cancer patients, people with AIDS, TB and hemophiliacs, in other words those are people whose lives rely on drugs and their timely administration. In Ukraine, 184 000 of Ukrainians live with HIV and hemophilia, 70 828 have active TB, 378 383 have TB infection and thus have a high risk of getting the disease. 960 000 of Ukrainians have different cancers. All of them are waiting for the life-saving drugs that have to be purchased for state budget funds.

It became a routine procedure to announce drug purchase tenders in May, with the results getting public in December; accordingly, the drugs start reaching patients only in January of February next year, which is 12-13 months later. A lot of patients simply do not live that long without their drugs. «Officials tell us that drugs are purchased in accordance with all the established procedures and according to the Law. Those people should look into the eyes of a sick child with cancer who has only a few days to live, and try to explain it to her», says Tetyana Ukrainets, a mother of a child with cancer.

«Last time I bought my drugs from my own pocket, says Oleh Guziy, a TB patient. «This year I cannot afford this. If drugs are unavailable, that would mean treatment discontinuation and a risk of getting a multi-drug-resistant TB, which means a TB that would not be susceptible to drugs. It is almost impossible to treat. I do not want to die…»

«This situation of delaying tenders and appointing a new Minister in spring, right before the tenders is not a new one, states Olexandr Shmilo, patient with hemophilia and Head of Ukrainian Hemophilia Society. From year to year we face the problem when due to corruption in the MOH patients, including, unfortunately, children die or become handicapped. Besides timely tendering, we demand systemic changes, in particular: revising the Law of Ukraine „About State Purchases“ in order for purchases of drugs and medical items be regulated on the level of legislation. Namely, there must be the date of annual purchase start stipulated for the mentioned products, because timely supply of drugs for hemophiliacs is of paramount importance for their lives.»

The appeal to the MOH was signed by six public organizations caring for patients living with HIV/AIDS, TB, cancer and hemophilia:
CF Ukrainian Community Advisory Board advocating for treatment, Charitable Foundation for «Development of Ukraine», All-Ukrainian Network of People Living with HIV, Board of Guardians of the Center of Pediatric Cancer Hematology and Bone Marrow Transplantation with the National Pediatric Specialized Hospital OHMATDYT of the MOH Ukraine, PO «Ukrainian Hemophilia Society», AUCF «Zaporuka».